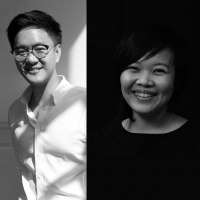 Onion is a Bangkok-based design practice founded in 2007 by Arisara Chaktranon and Siriyot Chaiamnuay. The two designers carry out a continuous exploration aimed at different needs for contemporary life styles. Onion brings the local craftsmen to explore the new techniques of using local materials. Together, they constantly push the boundaries of spatial designs in order to form a unified approach to retail and living experiences. The studioís portfolio includes a variety of products ranging from interior objects such as handmade lamps, chairs, tables, to architectural designs such as the boutique hotels entitled Sala at various locales.

Arisara Chaktranon. Received a Bachelor of Architecture in Interior Architecture (Honors) from Chulalongkorn University, Bangkok and a Masters Interdisciplinary design course in Interior, Industrial and Identity at the Design Academy Eindhoven. Worked as an interior architect at RDG planning & Design, Bangkok from 2000 to 2002. From 2005 until 2007 worked at Orbit Design studio as a senior interior designer. From 2007 has been a design director at Onion Co. Ltd.