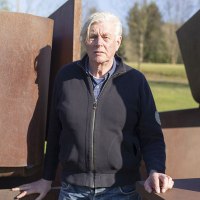 Considered a renegade in the landscape industry, the Dutch nurseryman Piet Oudolf (1944) has revolutionized the way perennial gardens are designed and viewed in landscapes today. With a new planting style and meticulous attention detail to the plants, Oudolf has forged the ability to break the rules when his eye finds it necessary to do so.

Born on October 27th, 1944 in Haarlem, Netherlands, Piet is known for his warm, generous, and humble openness. Oudolf first discovered his passion for plants after having travelled to England in the 70’s; that trip fueled his imagination to create a different type of garden (Sorin, Gardening gone Wild). At the time, his inspiration was the much talked about Mien Ruys from the Netherlands who was best known for her work at the Tuinen Mien Ruys, a collection of thirty model gardens.

With no formal training, he designs through instinct which is inspired from nature. He notes that in a garden, symmetry is easy but balance is trickier to attain, while always seeking to understand what the intent of a design is when looking over an architect’s plan. Using the texture and form of a plant to guide much of his designs, he believes that the color of a plant will fall into place accordingly in the landscape.

It is Oudolf’s innate curiosity, horticultural knowledge, and ability to create and undertake vast, open canvases with a new wave planting style that awarded him the design proposal in 2000 for the Lurie Garden, the world’s largest rooftop garden located inside Millennium Park, Chicago, IL. Working hand and hand with Seattle landscape architecture firm, Gustafson Guthrie Nichol, Piet considers the two and a half acre garden to be his greatest garden to date. He considers his work to be ‘purposeful abandon’, with a very naturalistic feel and appearance, stating that his philosophy while designing the Lurie garden was to bring nature back into the city.

Some of Oudolf’s most influential works in the United States have included the perennial plantings at Battery Park, NY; The Highline perennial plantings, NY; and the Goldman Sachs headquarters, NY. Among the many awards he has received, Oudolf was also the recipient of the prestigious Prince Bernhard Culture Prize, an award given by the Queen of Holland to a person who has contributed something extraordinary to the culture of the county. Oudolf continues to design perennial gardens while also serving as a masterclass in the classroom at numerous prestigious schools around the world.