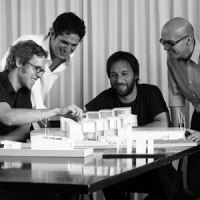 Productora is a Mexico City based architectural studio, integrated by four architects of different nationalities: Abel Perles (1972, Argentina), Carlos Bedoya (1973, Mexico), Victor Jaime (1978, Mexico) and Wonne Ickx (1974, Belgium). PRODUCTORA´s work is distinguished by an interest in precise geometries, the production of clearly legible projects with limited gestures and the search for timeless buildings in their material and programmatic resolutions.

Currently the office is working on projects in Mexico and abroad, from residential projects to public and corporate buildings. Its work has been presented in the Architectural Biennials of Beijing (2006) and Venice (2008), in the National Art Museum of Beijing, in the Victoria and Albert Museum in London, and in countries like Italy, Spain and the USA. In year 2008, the studio was selected by Herzog & de Meuron to participate in the Ordos100 Project to build a villa in Inner Mongolia, China. In the same year, PRODUCTORA won in collaboration with Lucio Muniain et al the International Competition for the New CAF Headquarters in Caracas, Venezuela (a project that is currently under development). Productora has been awarded by the Architectural League of New York with the Young Architects Forum in 2007 and the Emerging Voices in 2013.

Productora frequently operates in the contemporary art realm and has collaborated with artists such as Iñaki Bonillas, Marta Minujín, David Lamelas, Rita McBride, Francis Alys, and Pablo Bronstein, among others. The studio has realized museographies at the Beaux Arts Palace of Brussels, the Cultural Centre Clavijero in Morelia, and the Tamayo Museum, Sala de Arte Publico Siquieros, San Ildefonso and ARCHIVO in Mexico City.