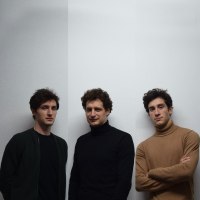 Pablo Ramos Alderete. Architect in 2011 from the Higher Polytechnic School of Architecture of Madrid (Honor Roll). Master in Advanced Architectural Projects ETSAM UPM. Alejandro de la Sota Award 2011. He has taught Projects class at ETSAM (2011-2012) and MPAA (2014-2016). Since 2013 he has been a professor of Architectural Projects at the Francisco de Vitoria University. He has participated as a professor in different international workshops and has given lectures at various European universities. He is currently doing his doctorate under the direction of Alberto Campo Baeza.

Jaime Ramos Alderete. Architect by ETSAM in May 2013 (Honor Roll). In 2015 he obtained the Master in Advanced Architectural Projects at ETSAM. He has been a mentor professor of Projects at ETSAM (2014-2015). He frequently collaborates with the Vicens + Ramos studio while developing his professional activity on his account. He is currently doing his doctorate under the direction of Alberto Campo Baeza and José Ángel Hidalgo Arellano. He has given lectures at various universities and international congresses.

Jorge Ramos Alderete. Architect in 2017 by the Higher Polytechnic School of Architecture of Madrid. Master in Architecture 2018 ETSAM with Honors. Hyspalit Award for students 2017. Second prize in the Archiprix PFC international popular vote. He has collaborated on several occasions in the Vicens-Ramos studio. He actively collaborates with the infographic, image and animation studio The Dreamer 3d.