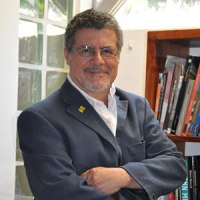 Álvaro Rojas, A.I.A. was born in San José, Costa Rica in 1949.  He was educated in the United States at Brooklyn Technical High School, New York, where he received his Architectural Technical High School Diploma in 1968 and at the School of Architecture and Environmental Studies of the City College of The City University of New York, where he obtained both the Bachelor of Science in Architecture (1972) and the Bachelor of Architecture (1973) degrees.  He studied under the direction of prestigious architects such as Jonathan Barnett, Richard Dattner and Bernard Rothzeid.

He has taught Design Studio, Theories of Architecture and Construction at various architecture schools since 1977.  He is the founder and President of Universidad del Diseño-UniDis (University of Design), and since 1993 directs its Faculty of Architecture and Environmental Studies.  He has lectured extensively in México, the United States, Brazil, Chile, Bolivia, Spain, Colombia, Venezuela, Argentina, Uruguay and Costa Rica. Some international speaking engagements are: in March 2004 at the Graduate School of Design/Harvard University, Cambridge, Massachusetts; in November 2005 in Tarija, Bolivia at the Bolivian National Architects Convention where he lectured on “Globalization and Professional Education of Architects”; In February 2006 he lectured at SCI-Arc, USC and Woodbury University in Los Angeles, California.  During the 2007 Fall Semester, he taught along with Peter Rowe and Mark Mulligan the GSD Harvard-UniDis Joint Urban Design Studio.  In March 2008 he was Guest Professor at the “Escola da Cidade” in São Paulo, Brazil where he also lectured on architectural education and the experiment at UniDis.  Recently, he was invited as Guest Juror at the School of Architecture of Woodbury University in Los Angeles, California.

Mr. Rojas is President of the Organizing Committee of MUNDANEUM International Reunions on Architecture.  MUNDANEUM has been held in San José in 1999, 2001, 2003, 2005, 2007 and 2009 with the participation of more than 100 of the top architects, urbanists and thinkers of the world.