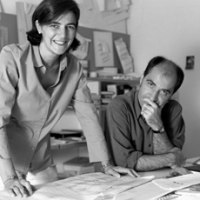 Rojo / Fernández-Shaw arquitectos is an architecture firm based in Madrid, Spain, founded in partnership by the architects María Begoña Fernández-Shaw Zulueta and Luis Rojo de Castro in 1994.

The firm has oriented its practice to the design and construction of public works, architectural competitions and academic research. They have been awarded in several architecture competitions, like the Auditorium in Guadalajara, the Centre for the Arts in Alicante, the Industrial Research Laboratories in Arnedo, a Sports Centre in Alcazar de San Juan, or a Public Housing Project in Ciudad Real. Their work has been published in a number of professional journals, among which stand Revista Arquitectura, AV, On Design, Tectónica, Detail, L'Industria de la Construzione, Space, Summa, On Arquitectura and others, and it has also been selected for the Spanish Architecture Bienale, the Biennale di Venezia and the FAD prize.

They are currently involved in the construction of the new Faculty of Sciences for the UNED University in Las Rozas, Madrid, as well as the International Center for Economic and Social Studies in Majadahonda, Madrid. They have recently completed the Sports Center of Alcazar de San Juan, Ciudad Real. Their entry for the Competition of a New Covered Swimming-pool in Saint-Prex, Switzerland, was awarded in 2015, as well as a proposal of a New Campus for the Runnymede College, Madrid, in 2016 and currently under construction.

Begoña Fernández-Shaw obtained a degree in architecture from the Escuela Técnica Superior de Arquitectura de Madrid en 1987 and a Master in Architecture from Cornell University, Ithaca, NY. In 2001 she was appointed Adjunct Secretary to EUROPAN/Spain.

Luis Rojo de Castro graduated from the Higher Technical School of Architecture of Madrid in 1987, beginning his academic work as a professor in the Department of Architectural Projects of this School in 1992. He is currently a Professor of Projects. Luis Rojo is PhD in Architecture from the Polytechnic University of Madrid, where he read the thesis "Obsessive Metaphors and Ideograms in Le Corbusier's architecture."