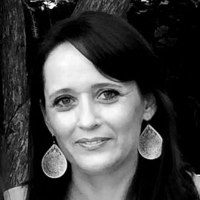 María Samaniego was born in 1972 in Quito, Ecuador. Her family was interested in different cultural manifestations, pre-Columbian and colonial art, music, literature. She studied architecture in Quito. Her bachelor final project: Housing in Modern Architecture of Quito (authorship with Yadhira Alvarez and Catherine Mejía).

She is co-founder of the Ecuadorian firm Arquitectura X. She finished her studies in 1998 and has a brief period of professional practice in Mexico. The work of Arquitectura X is awarded with the Special Honor Mention in the National Architectural Design category at the XII Pan-American Architecture Biennial of Quito for Casa MB6 in 2000 and Casa Santos Kronfle in the BAQ 2002 edition. Casa Samaniego and Casa MB6 were nominated for the Mies Van Der Rohe Prize for Latin American Architecture in 1998 and 2000 respectively.

In 2006 they were the winners of the National Ideas Competition to develop the Barranco de Cuenca megaproject, 2003. They were invited to the selection process for the Design Contest of the Nobel Center in Stockholm, 2012, and five times selected by Ecuador for the Ibero-American Architecture and Urbanism Biennial 2006, 2008, 2010, 2014, 2016, among other recognitions and mentions for their projects.

Samaniego has been a professor at the University of the Americas and Universidad San Francisco de Quito and jury of the Gold Medal University competition in the Faculty of Architecture and Urbanism, Central University of Ecuador in Quito in the years 2011, 2012 and 2016.In 2010 she participated as a jury of the Ornato Award granted by the Municipality of Quito. In the same year she was General Coordinator of the Pan-American Architecture Biennial of Quito, BAQ 2010.