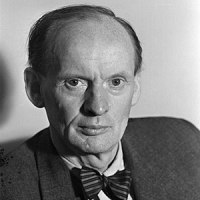 Hans Scharoun is a German architect born on September 20 th, 1893 in Bremen and died on November 25th, 1972 in Berlin.  He move to Berlin to study architecture in 1912, but he doesn't finish it because he enlisted as a volunteer to serve in World War II. Between 1919 and 1920 he joins the expressionist group Die Gläserne Kette (the "Glass Chain") of Bruno Taut, exchanging correspondence with other movement's members. During his stay in the German capital, he projects with a traditional language abroad - by political reasons - and experiments with fluid spaces inside. It is at this time when he meets Hugo Haring, who will influence him for the rest of his life.

Hitler's dictatorship influences in Scharoun's conception of the building as a democracy, leaving Modernism, and adopting a style where each element is a citizen who participates without losing its identity.
After completing his studies at the Königliche Technische Hochschule (Technical University of Berlin) he obtains the chair of the Art Academy in Breslau (1925). There he develops his first projects and organizes several exhibitions, including the first one of the expressionist group Die Brücke.

Scharoun - between 1933 and 1945 - turns obsessed with the development of single-family homes, typology which not interests him before or after this time, but it will be at the end of the Second World War when Scharoun consolidates himself in a unique style, and directs his architecture to larger projects, reaching its highest expression in the Philharmonie in Berlin in 1963, completely in a organic style. This project will be worth a reputation as an architect, with whom he developed all kinds of orders until the end of his life.