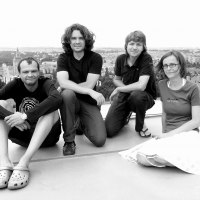 This Czech group of young architects is made up of: Aleš Kubalík, Josef Kocián, Jakub Našinec and Veronika Sávová. They established their joint office in 2004, after met as students in 1993.

In 2013 they were awarded with the BigMat ’13 Czech Republic National Prize together with the architects Petr Janda / Brainwork.