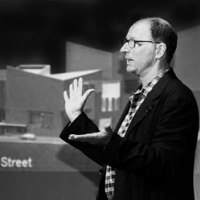 John Tuomey (Tralee, Ireland, 1954), gets the B.Arch. at University College Dublin in 1976, working for Stirling Wilford & Associates (London) between 1976 and 1980 and the Office of Public Works in Dublin between 1981 and 1987. Tuomey has served as visiting professor at universities like Princeton's Graduate School of Design (GSD), Harvard, Cambridge and Oxford. He was president of the Architectural Association of Ireland between 1992 and 1993, and member of the Royal Institute of Architects of Ireland (1994). In 2004, he obtained the M.Arch from University College Dublin, becoming a professor of Architectural Design (Architectural Design) since 2008 in the same university. It has been Chair of RIBA Stirling Prize jury in 2009, and Honorary Member of the American Institute of Architects (AIA) in 2010.

Sheila O'Donnell and John Tuomey established O'Donnell + Tuomey in 1988. The practice has developed an international reputation for cultural, social and educational buildings including the Irish Film Centre, Ranelagh School, Furniture College, Letterfrack, Glucksman Gallery, Cork, Timberyard Social Housing and the Lyric Theatre in Belfast. They are currently engaged in the design of university buildings, schools, housing and mixed use buildings in Ireland and the UK. They have been involved in urban design projects including the Temple Bar regeneration in Dublin and the Zuid Poort masterplan in Delft. Both lecture in University College Dublin and have taught at a number of schools of architecture in UK and USA including AA, Cambridge, Princeton, Harvard, Syracuse and Buffalo Universities. O'Donnell + Tuomey's work has been widely published and exhibited and has received many national and international awards.