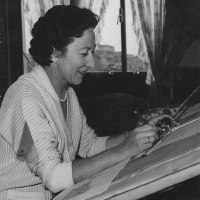 Matilde Ucelay Maórtua (b. 1912, Madrid - d. November, 24th 2008, Madrid, Spain) was the first woman to have a degree in architecture in Spain, in 1936, and also the first to pursue a full professional career: more than 120 projects carried out entirely by herself with the sole occasional help of a quantity surveyor, some of them abroad, in more than 40 years of professional practice. Most of her works are single-family houses, such as the one she built for José Ortega Spottorno, but she also designed factories, laboratories, warehouses and shops. In her works stands out the sensibility for the use and the care in the constructive details. An exceptional trajectory recognized by the National Architecture Prize 2004.

Ucelay belongs to that generation of women from the Spanish enlightened bourgeoisie who, educated in liberal, artistic and professional environments, began to enter universities in the first decades of the 20th century. Ucelay brilliantly studied high school at the Instituto Escuela, which she combined with her piano studies, and in 1931 she entered the Madrid School of Architecture. There she meets Félix Candela, whom she will bind for life, and Fernando Chueca Goitia. When she finishes his studies, her classmates offer her a tribute to the one attended by Amós Salvador, Minister of the Interior.

In 1940 she was purged by the General Directorate of Architecture and condemned in the Council of War to perpetual disqualification for public, managerial and trust positions and, for five years, for the private practice of the profession. As a consequence, she never received public commissions and her first projects could not bear her signature.

The women of Ucelay's generation opened paths in Spain in the different areas of art, science and professions, although many of them abandoned or simply failed to exercise their professions in the hostile environment of Franco's regime. This was not the case with Ucelay. On the contrary, at a time when women lacked legal rights, Ucelay, with great intelligence, dedication and character, fully exercised a liberal profession of important responsibilities until her retirement in 1981.