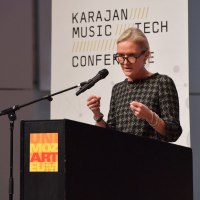 Benita von Malzahn. Director of Cultural Engagement at Volkswagen. Being a qualified woodcarver and holding a degree in art history, Benita von Malzahn started her career as a PR professional. She was involved in PR projects at different German museums before she held senior positions within the communication departments at AUDI AG and Bentley Motors.

In 2011 she moved to Volkswagen Group, where she strengthens sustainable corporations with pioneering artists and cultural institutions as well as the development of cultural education initiatives around the world, in order to offer a wide-ranging audience with the opportunity to engage with creative ideas.

Among other activities, the Wolfsburg-based global company has been a strong partner for the Museum of Modern Art (MoMA) and MoMA PS1 in New York for nearly nine years, now. Benita von Maltzahn also paved the way for further partnerships, enabling Volkswagen to join forces with Nationalgalerie – Staatliche Museen zu Berlin and to collaborate for projects with the Victoria & Albert Museum in London, the YUZ Museum in Shanghai, the Quatar Museums in Doha and others.