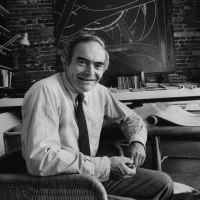 Zeidler Architecture has been creating meaningful spaces for people to connect for over 65 years, with considerable experience in master planning, urban and architectural design. The practice was founded by Eberhard Zeidler. They are a leading Canadian architectural firm that brings together the experience of more than 100 professionals, collaborating nationally across their Toronto, Calgary, Vancouver and Victoria offices.

Their portfolio spans a broad range of work including residential, commercial and mixed-use properties, civic and academic buildings, healthcare and research facilities, performing arts centres, hotels and resorts, and transportation.

Eberhard Zeidler (Germany, Braunsdorf, January 11, 1926 – Canada, Toronto, January 7, 2022) was one of the last living links to the Bauhaus school and the man responsible for some of Canada’s most significant mixed-use urban developments including Ontario Place and the Eaton Centre in Toronto. He was instructed under the influence of the Bauhaus school in Weimar and the Technische Hochschule Karlsruhe. He fled East Germany and worked in the office established by Emanuel Lindner, his former professor. There, he constructed several factories and medical buildings. Zeidler subsequently immigrated to Canada in 1951.

Zeidler first joined an architectural firm with Blackwell and Craig in Peterborough, Ontario. He later relocated to Toronto in 1963 and worked for the firm became Craig, Zeidler and Strong until 1975. One of the essential elements of his early works is his employment of striking interior atrium space, which became widespread on an international level during the 1970s. Moreover, his experience in the Bauhaus school made him familiar with the technological matters in building design. These included structural and mechanical services (most notably, exposed air-handling ducts), as well as aspects that ease movement and communication. This was exemplified in the McMaster University Health Science Centre, his breakthrough project, which was meant to resemble a large construction set for children. The building utilized regular geometric building modules, coupled with glazed service and circulation towers, internally exposed steel trusses, ducts, and an automated materials delivery system.

Most of Zeidler's structures were public buildings. He rarely designed private residences, drawing up approximately 20 in his career, most notably the four-storey home in Rosedale that he constructed for his family during the late 1960s. He officially retired in 2009, but continued to go to work daily as a senior partner emeritus at the firm, now called Zeidler Partnership Architects, in Toronto. The firm also has offices in Calgary, Victoria, BC, London, Berlin, Beijing, and Abu Dhabi. He also taught at the University of Toronto as a visiting lecturer and critic, before working as an adjunct professor from 1983 to 1995.

Zeidler was appointed an officer of the Order of Canada in June 1984 and invested four months later in October. He has also received the Order of Ontario that same year. He was conferred the gold medal of the Royal Architectural Institute of Canada in 1986. Three years later, he was granted an honorary Doctor of Architecture by the University of Toronto.[5] Zeidler was the recipient of the Queen Elizabeth II Golden Jubilee Medal (2002) and the Queen Elizabeth II Diamond Jubilee Medal (2012).