It's a master class in collaboration as violinist Robert Gupta and cellist Joshua Roman perform Halvorsen's "Passacaglia" for violin and viola. Roman takes the viola part on his Stradivarius cello. It's powerful to watch the two musicians connect moment to moment (and recover from a mid-performance hiccup). The two are both TED Fellows, and their deep connection powers this sparkling duet.

Violinist Robert Vijay Gupta joined the Los Angeles Philharmonic at the age of 19. He made his solo debut, at age 11, with the Israel Philharmonic under Zubin Mehta. He's got a master's in music from Yale. But his undergraduate degree? Pre-med. As an undergrad, Gupta was part of several research projects in neuro- and neurodegenerative biology. He held Research Assistant positions at CUNY Hunter College in New York City, where he worked on spinal cord neuronal regeneration, and at the Harvard Institutes of Medicine Center for Neurologic Diseases, where he studied the biochemical pathology of Parkinson's disease. 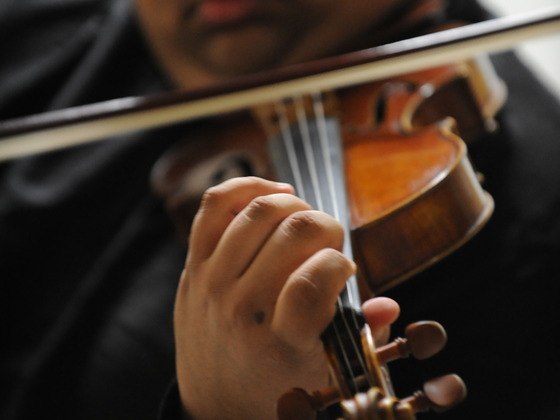