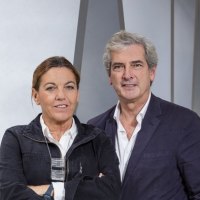 They were appointed by the Government of Spain Directors and Curators of the Spanish Pavilion at the 8th International Architecture Exhibition of the Biennale di Venezia in 2002.

Their works have been awarded a number of prizes  as the EUROPAN 1 and 4 Awards in 1988 and 1996 at the European level for New Residential Solutions; National Prize of the Council of Colleges of Architects of Spain in 2005 for the best Residential Solution built; National Fine Arts Award 2009 awarded by the Spanish Ministry of Culture; Award at the IV Biennial of Architecture in 2004; Madrid City Council Awards for the years 2000 and 2005; Community of Madrid Awards for the years 2001 and 2005; National Award ARPA 2010 National Heritage Intervention; Award of the College of Architects of Madrid in 2005; Award ASPRIMA of the Madrid Real Estate Exhibition in 2005 ...........

Their experience in the design and construction of museums has played an important part in his project research. The "ABC Foundation Museum in Madrid", the Spanish Pavilion at the 8th International Exhibition of Architettura di Venezia ", the" Museum of Fine Arts of Cáceres "and the" Spanish Motorcycle Museum in Alcalá de Henares ", as well as the participation in competitions such as the "Visigothic Museum of Art in Mérida", the "Archaeological Museum of Córdoba" and the "National Museum of Visual Arts in Madrid", among others.