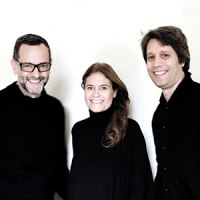 ARCHIKUBIK, ecosystem of architecture, urbanism and urban landscape, established in 2001 by Marc Chalamanch, Miquel Lacasta y Carmen Santana, is composed by an international and multi-disciplinary team that works in an atmosphere of R&D in @kubik space, in Barcelona.

Its process of urban and architectural work is framed within the constant development of synergies and exchanges between public space and private participative space, with the purpose of rethinking our cities from the concept of the e-polis, the polis of the information society, as a place for learning, debate, diversity, respect and exchange. Conceiving, giving the chance to inhabitants to become eco-citizens within communities, through architecture, to make public space an opportunity to rephrase our territories and our cities in the era of social networks. In order to conciliate this, our projects are based on the scale 1/ ♥, a system that is capable of going further to be included within a transversal ecosystem, with the aim of articulating a global vision in a territorial scale, the one from the city, the neighborhood and the human scale, all of it incorporated to the time vector.

Their research is centered in the wide interpretation of ‘’green’’ as a tool for creation, as an infrastructure for the territory, with the objective of creating an organoleptic environment, open and sensitive. The productive landscape as a horizon for reflection. Moving forward in a process of urban network acupuncture, all the projects and scales represent a chance to start strategies and tactics that allow to go further than the conventional codes that belong to last centuries’ industrial world. The investigation of new typologies to approach the constant transformations of society is part of our DNA.

The last recognitions are: prix Futures Possibles for the ZAC Rouget de Lisle and International FAD Award for the housing project in Ivry-sur-Seine (under construction). Also, we are finalists for the last phase of the international competition Reinventer.paris with a third use building in Clichy-Batignolles and finalists for the Ascer Award for ceramic buildings with the Parking Saint-Roch in Montpellier. Archikubik has been twice selected for the Venice Biennale with the Parking Saint-Roch in Montpellier for the Catalan Pavilion and the Diposit del Rei Martí in Barcelona for the Spanish Pavilion.