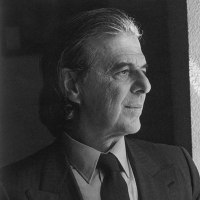 Ricardo Bofill Levi. Born in December 5th, 1939 in Barcelona. He studied architecture at the Barcelona School of Architecture, a center from which he was expelled in 1957 for his political activism. He subsequently graduated in Urbanism and Architecture at the Haute École du Paysage, d ’Ingénierie et d’ Architecture in Geneva, Switzerland.

In 1963 he gathered a multidisciplinary, multitalented group in order to confront the complexity of architectural practice; architects, engineers, planners, sociologist, writers, movie makers and philosophers, conformed what is known today as the Taller de Arquitectura.

In his first period, Bofill recuperated the characteristic craft elements of traditional Catalan architecture. Later on, he began to deal with urban planning problems at a local level within the Spanish political and social context. From this period are the theoretical project The City in Space, and the construction of Walden 7.

Interested in the urban planning problems of the developing countries, Bofill transported a part of his team to Algeria where he collaborated with the government in the urban planning and housing field. His work culminated two years later with the construction of Houari Boumédienne Agricultural Village in the south-eastern part of the country.

In 1971 he formed a complementary team in Paris, in response to the demands of various projects for the French “New Towns”. During this phase, he created projects like La Petite Cathédrale and La Maison d’Abraxas.

From 1979 on, the activities of Bofill’s Taller de Arquitectura took place mainly in France, with the simultaneous construction of four projects: Les Arcades du Lac and Le Viaduc in Versailles; Le Palais d’Abraxas, Le Théâtre and L’Arc in Marne-la-Vallée; Les Echelles du Baroque in the XIV district in Paris; as well as Antigone in Montpellier. His team settled in Paris and worked on the industrialized construction of social housing.

In 2000 Bofill regrouped his activity in Spain. From his headquarters, a former cement factory in the outskirts of Barcelona, Bofill’s Taller has worked on projects which include the schemes for Luxembourg’s Place de l’Europe, New Castellana in Madrid, Boston Central Artery;  large infrastructures for public transport, as the recent Terminal 1 for Barcelona Airport; sports, cultural, and retail facilities in Europe and Asia; both social and Class A residential buildings, from Dakar to Stockholm, from Beijing to Paris; office buildings and headquarters of companies in the US, France, Spain.