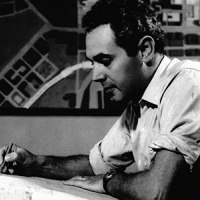 Antoni Bonet i Castellana, known as Antonio Bonet, (Barcelona, August 13, 1913 - September 13, 1989) was an architect, urban planner and Spanish designer, who lives in the River Plate for most of his life.

He began his professional career with the architects Josep Lluís Sert and Torres Clavé, who founded the MIDVA (Home Furnishings current housing). In those years he was a member of GATCPAC. In 1936, just completed his architectural studies, travels to Paris where he joined the studio of Le Corbusier.

River Plate. Spanish Civil War broke out, and decided to emigrate to the Rio de la Plata. He lived in the city of Buenos Aires in Argentina and in Punta del Este in Uruguay.

Austral Group founder Jorge Ferrari Hardoy in conjunction with and Juan Kurchan. He is credited with its partners the mythical BKF, although the authorship of it is finally assigned to the Argentine Jorge Ferrari Hardoy. Projects the House of Studies for Artists in Buenos Aires; and Terrace Palace building and Rivadavia and the Americas in Mar del Plata galleries. Built numerous buildings on the coast of Punta Ballena (notable Solana del Mar hotel and Berlingieri house in Portezuelo), which makes urbanization. Also works projects in Paraguay, residing for decades in Buenos Aires, traveling to Barcelona and Madrid.

Barcelona. Barcelona projected the Ricarda (1949-1963) and Greyhound Track Meridiana, by which received a 1963 FAD architecture prize. Likewise he projected between 1960-1965, together with Josep Puig Torné, the residential complex of Pine Beach, Gava Mar, on behalf of society FAESA family Guardans Cambo, example of rationalist construction advocated by the Bauhaus and applied by the GATCPAC, grouping to which belonged.

Theory. He considered architecture as an organizing matter in the life of man and believed that the activity of the architect extended from the conception of a piece of furniture to a city planning. One of his constant was the effort to integrate the various scales of the human habitat, researching new materials and shapes for architectural spaces and furniture in the service of society.