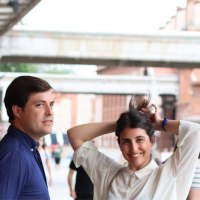 Julio Cano and Bárbara Bardin are the founding architects of Canobardin. A young architecture and design studio that edits its own designs, creating special pieces for individuals and also in collaboration with other design studios.

Julio Cano was born in Madrid 1986. Graduated architect in Madrid 2013. He was always interested on traditional architecture and its relation to the local climate and materials as a way of sustainability .He was involved on several projects of rehabilitation

Since 2013 then, he worked in Selgascano, where he was involved in important projects such as Plasencia auditorium or Secondhome offices in Lisboa and London. In 2017 he decided to form his own studio “Canobardin” along with Bárbara Bardin.

Bárbara Bardin was born in Madrid 1987. Graduated architect in ETSA Madrid in 2012. During the degree she collaborated in studios like Selgascano, Ezquiaga architects, Iñaki Carnicero, as well as investigation schollarships at the university.

After her studies, she collaborated with several studios such as Selgascano, Irisarri Piñera, Ezquiaga, and Iñaki Carnicero.

Since 2012 she worked with Selgascano and she was involved in projects such as the TN Building in Stockholm, the Serpentine Pavillion, Secondhome offices, the Martell pavilion, etc In 2017 she decided to form his own studio “Canobardin” along with Julio Cano.