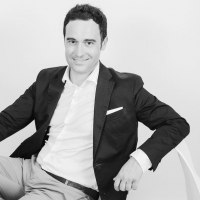 Guillem Carrera, Tarragona (1979), architect, studied at the School of Architecture of Barcelona of the Polytechnic University of Catalonia, where he graduated in 2004 with a project of a Leisure Center in Hellinikon, Athens, Greece.

During his studies he participates in international workshops in Italy and Spain. In 2005 he opened a studio in Tarragona. Since 2005 he has worked in the Territorial Planning Service of Tarragona of the Department of Territory and Sustainability of the Government of Catalonia. From 2005 to 2009 he collaborates with the Demarcation of Tarragona of the Official College of Architects of Catalonia in different cultural activities related to architecture and heritage conservation.

Since 2006 he has been attending the Territorial Commission of the Cultural Heritage of Tarragona of the Department of Culture of the Generalitat of Catalonia. In 2009 the work of reform and rehabilitation of the Agricultural and Credit Section of the Cooperativa Agrícola de La Canonja was selected in the 6th Alejandro de la Sota Architecture Biennale. In 2011, he is the architect invited to the final correction of projects of the Technical School Superior of Architecture of the Rovira i Virgili University. In 2012, he is a speaker at conferences at the headquarters of Tarragona of the Official College of Architects of Catalonia and the Official College of Quantity Surveyors and Technical Architects. In 2013 he was a guest speaker and architect at the Urban Biopsies Workshop of the Polytechnic School of La Salle - Ramon Llull University. In 2016, he was a speaker at the Demarcation of Tarragona of the Official College of Architects of Catalonia and at the Public Library of Tarragona. 2016 is selected as the highlight of the Day Center and Casal for seniors of Blancafort in the architecture platform Architizer, in New York, USA. His achievements have been published in sector magazines, architecture books and specialized web platforms.