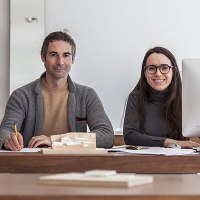 Marià Castelló · Architecture began its course in February 2002 with the first public and private initiative projects in Formentera. The connection, the respect and the commitment with the culture, the landscape and the territory of the minor of the Pitiüsas islands was determining in the professional and personal orientation chosen.

The study has collaborated with editorial projects of different nature, exhibitions and presentations with the purpose of spreading both the patrimonial baggage existing on the island and those contemporary interventions generated with criteria and reflection.

Among his last prizes, he stands out as a finalist in the 59th edition of the FAD Awards in the category of "City and Landscape" for the work "Restauració del Fossar Vell of Sant Francesc" (2017), the Special mention (2nd Position) of the Prize European Intervention in the Architectural Heritage AADIPA (2017) for the Restoration of the Tower des Pi des Català, s. XVIII in Formentera, or the work selected in the Catalan Pavilion of the Biennale di Architettura di Venezia (2012) "Architectural Rowers" in the "Contexts" section.