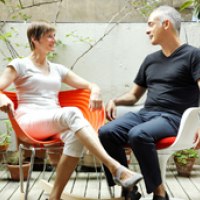 Founded COLL- LECLERC in 1993 with provisional locations in Paris (1993) and New York (1994-96). In 1997 they won the first prize in the national competition for the  Music and Dance Conservatory ant Theater School in Palma, and the Sant Just Sport Center which brings them to establish permanently their practice in Barcelona. Since then they have been awarded First prizes in the following competitions: the Sant Just Sport Complex (FAD award finalist 2002), Montilivi Health Centre (8th Spanish Architectural Biennals finalist 2005), 2004 Forum Housing, TMB Parc atop a Bus depot, the Londres-Villaroel facility complex, a hibrid complex in Downtown Barcelona and the Redesign of Plaça Urquinaona in Barcelona.

They have taught and lectured throughout Spain and at the London Architectural Association, Aarhus, Frankfurt, Phoenix, Sao Paulo, Graz, China and Mexico. They have been selected for the young architects Cycle “Nombres” in the Arquerias de los Nuevos Ministerios in Madrid (1999), for the 8th and 11thVenice Bienal (2002, 2008), for the 8th and 9th Spanish Architectural Biennals (2005, 2007), for the exhibition on New Catalan Architecture at the DAM Museum in Frankfurt "Patent Constructions" (2007) and the Stockholm Arkiteckturmuseet (2008) and  at Cité de l’architecture et du Patrimoine Paris “Contemporary Catalan architecture” (2009).

In 2007 COLL-LECLERC has been awarded with the City of Barcelona Architectural Award, 9th Spanish Architectural Biennal Award and National Award for Public Housing and they are one of 100 international architects specifically recommended by Herzog&De Meuron - FAKE Design to come to China and design one of 100 villas in a newly emerging residential district in Ordos (Inner Mongolia).  In 2010, their Housing project in Lerida has been awarded with the AVS prize for best Public Housing in Catalunya.

Since 2010, Jaime Coll is member of the Madrid urban quality commission and is subdirector of the design department at the ETSAB.