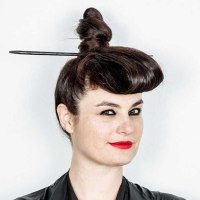 Eva Franch i Gilabert, is an architect, curator, educator and lecturer of experimental forms of art and architectural practice, who specialises in the making of alternative architecture histories and futures.

Since 2010, Franch is the Chief Curator and Executive Director of Storefront for Art and Architecture in New York. In 2014, Franch, with the project OfficeUS, an experimental office for the production of history, ideas and work, was selected by the US State Department to represent the US at the XIV Venice Architecture Biennale. Franch is currently professor at The Cooper Union School of Architecture.

Franch has taught at Columbia University GSAPP, the IUAV University of Venice, SUNY Buffalo, and Rice University SOA. In 2004, she founded her solo practice OOAA (Office of Architectural Affairs). She has received numerous awards, and her work has been exhibited internationally including FAD Barcelona, the Venice Architecture Biennale, and the Shen-zen Architecture Biennale, among others. She has curated national and international projects including OUT, the 2014 Arquia Proxima biennial competition and Borders, the 2011 Think Space concept competition programme.

At Storefront, some of her recent projects include Architecture Conflicts, Letters to the Mayor, World Wide Storefront, the Competition of Competitions, Storefront TV, the Storefront International Series, and the publication series Manifesto. Exhibitions include Sharing Models; Measure; POP: Protocols, Obsessions, Positions Aesthetics-Anesthetics; Past Futures, Present, Futures; No Shame: Storefront for Sale; and Being. Her latest initiative, the New York Architecture Book Fair, will be presented in 2018.

Franch has lectured internationally on art, architecture, and the importance of alternative practices in the construction and understanding of public life at more than fifty educational and cultural institutions around the globe. Franch has been a member of international juries and nominating and advisory boards including the Hong Kong Design Trust, Ideas City, +Pool and the YAP PS1-MoMA in New York. Franch’s work has appeared in the form of articles or interviews in journals, newspapers and publications worldwide. Recent publications by Franch include Agenda (2014), Atlas (2015) and Manual (2017) published by Lars Muller as part of OfficeUS. Upcoming publications include. The Book of Architecture Books and Letters to the Mayor.