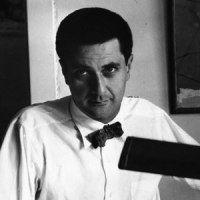 Bertrand Goldberg (1913) is an American architect settled in Chicago and active since 1937. He studied in Harvard in 1930. In 1932 he decided to go to Berlin to study in the Bauhaus until 1933, time he worked with Ludwig Mies van der Rohe. Homeward in the USA, he received his diploma in the Armour Intitute of Technology of Chicago in 1934.

In 1937, he opened his own studio. Goldberg in his beginnings was influenced by the Bauhaus’s rationalism and Mies van der Rohe, as it can be seen in his first prefabricated projects for the Federal Government in Suit (Maryland) and in Lafayette (Indiana), built from 1937 to 1944.

Bertrand Goldberg planned prefabricated bathrooms (Stanfad) with rounded shapes in 1945-1948 and coaches, for the Pressed Steel Car Company, built with plastic materials, which make a statement of his later projects of concrete towers.

He designed his most important work in 1959: Marina City, a mix use complex in Chicago River. The project was formed by two twin residence towers of 40 flats and a great podium of 20 flats that housed shops, parking, theatre and spaces for boats.