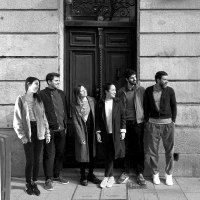 gon is a Madrid-based architecture and design office headed by Gonzalo Pardo since 2014. His practice focuses on research and development of unique architectural projects of different scales ranging from urban planning to buildings to interior construction.

The common denominator of his works is a playful, experimental, critical and optimistic view of the contemporary. In a constant dialogue based on observation and details, their interest focuses on the creative processes of architectural design and construction, as well as the role of mediation and communication of architecture as fundamental vehicles for the transformation of the world into a more sustainable, dignified and free place.

He has been deputy curator of the Spanish pavilion at the 16th Venice Biennale, and since 2000 he has obtained 41 national and international awards, including the first prize for the remodeling of the AZCA block in Madrid in 2007; the second prizes in the international Skyscraper competitions, in New York, and Velux, in Denmark, in 2007; COAM award in 2014 for the Paréntesis curator cycle, honorable mention in the Europan 14 competition at the Barcelona location in 2017 and finalist in the FAD Awards for Architecture and Design 2020.