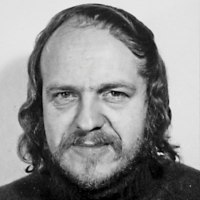 Ron Herron (born August 12, 1930 in London, died in Woodford Green, Essex, on October 1, 1994) was an important English architect and teacher. He highlights his work with the experimental group Archigram, founded in London in the early 1960s. Herron was the creator of one of the group's most well-known projects: Walking City.

Ron Herron was trained as a draftsman at the Brixton School of Building. After two years of military service in Germany, he decided to become an architect, finishing his architectural studies at the Regent Street Polytechnic in London. In 1954, Herron married Pat Ginn and they had two children. Soon after, he started working for the London County Council, with his future Archigram colleagues: Warren Chalk and Dennis Crompton. Joining then Peter Cook, Mike Webb and David Greene, who had already formed as a group in a café called Swiss Cottage, where they had published a homemade brochure with the name of "Archigram" (a set of the words ARCHitecture and teleGRAM). After the publication of the second edition, Cook, Webb and Greene looked for Herron, Chalk and Compton, whom they only knew by hearing. The six formed the core of Archigram. In 1963, the group was invited by Theo Crosby to make an exhibition of Walking City at the Institute of Contemporary Arts, which will become a kind of manifesto. By the end of the sixties, Archigram's thought had been incorporated into some Japanese buildings, and had influenced the creation of the Pompidou Center in Paris, which was inspired by a 1968 Herron drawing; Oasis. For many, the ideas that are in the Archigram designs are more important than the built architecture.

Walking City is one of Herron's most celebrated works, later described as "the international icon of radical architecture of the 1960s." In 1965, the first proposal for Walking City was published in the fifth edition of the Archigram brochure. The evocative drawings of Herron's project will become one of the most recognizable images of the work and the ideas of the group.

During the 1970s, Herron continued to work with Archigram. Later, he moved to work with Halpern & Partners, and later with British architect Colin St John Wilson. In 1981 Herron founded Herron Associates with his sons Andrew and Simon. The company built the well-known Imagination Headquarters in London. Herron was a professor at the Architectural Association in London from 1965 to 1993.