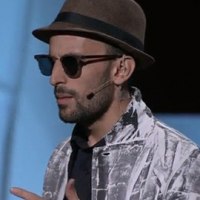 JR (Jean René) was born in France in 1983 and currently works in Paris and New York. He exhibits freely in public sites in cities around world. His work mixes Art and Act, talks about commitment, freedom, identity and limit. After finding a camera in the Paris metro in 2001, he traveled Europe to meet those who express themselves on walls and facades, and pasted their portraits in the streets, undergrounds and rooftops of Paris.

Between 2004 and 2006, he created the series “Portrait of a Generation”. In 2007, with Marco, he made Face 2 Face, the biggest illegal exhibition ever. JR posted huge portraits of Israelis and Palestinians face to face in eight Palestinian and Israeli cities.

In 2008, he embarked on a long international trip for “Women Are Heroes”, in which he underlines the dignity of women who are often the targets of conflicts. That year he also created “The Wrinkles of the City” in Cartagena, Shanghai, Los Angeles, Havana, Berlin and Istanbul. In 2010, his film “Women Are Heroes” was presented at Cannes Film Festival. The same year, JR created “Unframed”, a project in which he uses images that are not his, and reframes them in a new context, on a larger scale.

In 2011 he received the TED Prize, after which he created “Inside Out”. In a collaboration with New York City Ballet, he used the language of ballet to tell his story of the riots that happened in the French suburbs in 2005 and created “Les Bosquets”, a ballet and eponymous short film whose music was composed by Woodkid, Pharrell Williams and Hans Zimmer and which premiered at Tribeca Film Festival.

In 2014, he created an installation with 4,000 faces in and on the Pantheon in Paris. The concept of crowd will be used for a video installation at the CAC Malaga, and on the façade of Assemblée Nationale and other monuments in Paris during the COP 21 summit at the end of 2015. The same year, he worked in the abandoned hospital of Ellis Island and directed the short movie ELLIS, starring Robert DeNiro. In 2016 he was invited by the Louvre and made the famous pyramid disappear through a surprising anamorphosis. He worked in Rio de Janeiro during the 2016 Olympics and created new gigantic sculptural installations using scaffolding, at the scale of the city, putting an emphasis on the beauty of the athletic movement.

His latest projects include a museum exhibition dedicated to children at Centre Pompidou, a permanent collaboration with the Brazilian artists Os Gemeos at Palais de Tokyo in Paris, in a space used to store stolen pianos during World War II, and a film with Agnès Varda, co-directing a movie with the Nouvelle Vague icon, traveling around France to meet people and discuss their visions. This Spring, JR will unveil a giant mural at Palais de Tokyo, in connection with a new project based in Clichy-Montfermeil. JR is represented by Galerie Perrotin since 2011; he has had shows in Paris, Hong-Kong, Miami and New York. In 2013, JR got his first museum retrospectives in Tokyo (Watari-Um) and CAC in Cincinnati, followed by Frieder Burda in Baden-Baden in 2014 and HOCA Foundation in Hong-Kong in 2015.