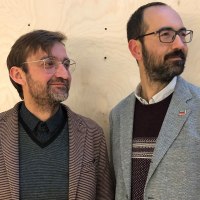 They both received their architecture degrees from the Escuela Técnica Superior de Arquitectura of Sevilla in 2003.

They have balanced their professional practice with academic activities as professors at the Department of Architecture at Penn State University, USA.

After working in The Netherlands at VHP and WEST 8 respectively, in 2004 they established their own practice under the name KAUH. Between 2004 and 2012 they worked from Seville, and as of 2012 they do so from Granada. With a multifaceted profile, they mostly work in the Andalusian context.

Among the different fields architecture covers, their professional activity focuses on building, public space and landscape design. In their practice they also carry out projects in the editorial field related with the spreading of architecture and they participate in actions that offer them the opportunity to reflect upon the city, the discipline itself and its relationship with society.

In their practice, they believe in the perceptive and relational experience that our work generates in the construction of our environment. All of this is interwoven by their foremost interest: to materialize and add quality to what belongs to everyone, to the places in which they all interact, the places in which the collective is expressed.