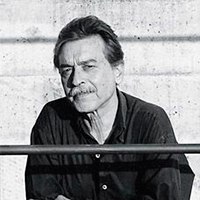 Paulo Mendes da Rocha spent his childhood between the city of Vitória, the harbour capital of Espírito Santo where he was born in October 1928 at his maternal grandparents’ house, and Paquetá Island, in the middle of Guanabara Bay in Rio de Janeiro, the national capital, where the Mendes da Rocha family lived.

The architect’s family moved to the city of  São Paulo in 1940, where his father Paulo Menezes Mendes da Rocha was appointed Chair of the Naval and Harbour Resources of the Polytechnic School of the Universidade de São Paulo, which he directed from 1943 to 1947.

Still in São Paulo, Paulo Mendes da Rocha graduated from the Mackenzie Architecture School in 1954 and was able to build a solid carrier as a designer of houses, schools, apartment buildings, museums, furniture, theatre sets and several urban projects.

After graduation, he won a national project competition in 1957 for the construction of a gymnasium, the Clube Atlético Paulistano. This work brought him public recognition and also won the Grande Prêmio Presidência da República at the 6th Bienal of São Paulo in 1961.

In 1968, the architect won the national project competition for the Brazilian pavilion at Osaka Expo 70 and traveled to that city to follow the construction development in 1969.

Amongst several international honours, he has been awarded the Honorary Fellowship from the Conselho Internacional dos Arquitetos de Língua Portuguesa, The Mies Van der Rohe Foundation Prize for his project for São Paulo’s Pinacoteca. Furthermore, he was selected in 2000 to represent Brazil at the 7th International Architecture Exhibition of La Biennale di Venezia. He received the Pritzker Architecture Prize in 2006.

In Brazil, the architect was twice honoured with the Ordem do Mérito Cultural, in 2004 and 2013. He also received the Troféu APCA (Associação Paulista de Críticos de Arte) twice, in 2012 and 2015.

Whilst working as an architect, Mendes da Rocha joined the world of academia thanks to his good friend, Vilanova Artigas, one of Brazil’s most remarkable architects. Both architects enhanced the School of Architecture of the Universidade de São Paulo with their social and humanistic views, which have had a major influence on many generations of architects and artists to come.

Besides his architectural and urban projects, he designed some interesting furniture: one example is the chair “Paulistano”, published in the magazine New Furniture. Neue Möbel. Meubles Nouveaux, Verlag Gerd Hatje, Stuttgart, 1958. The chair is now industrially produced by French company OBJEKTO.