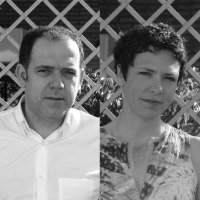 MGM Arquitectos, Morales Giles Mariscal Arquitectos, is an architecture studio founded by José Morales and Juan González Mariscal in 1987. In 1998 Sara de Giles Dubois joined the studio as a new partner. It was in 2004 when the firm acquired the name Morales de Giles Arquitectos SL.

The firm's work has been carried out mainly on the basis of important awards in conceptual competitions. The projects have been developed looking for quality solutions at each stage, a strong coherence between all aspects of the project and a particular attention to details obtained through absolute control of materials and technological solutions.

José Morales is a Professor in the Department of Architectural Projects at the University of Seville since 2004. He founded the architecture studio MGM Morales, Giles, Mariscal in 1987.

He has been curator of the XIV Spanish Biennial of Architecture and Urbanism together with Sara de Giles.

Sara de Giles Dubois is a PhD architect and Professor of Architectural Projects at the ETSA in Seville since 1998. Since then she has shared an architecture studio with José Morales, as a main partner, at MGM Arquitectos.

She has been curator of the XIV Spanish Biennial of Architecture and Urbanism together with José Morales.