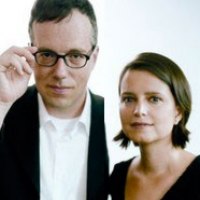 MOS architects is an internationally recognized architecture practice based in New York. MOS has been honored with numerous awards including: The Cooper Hewitt, Smithsonian Design Museum’s National Design Award in Architecture in 2015, a 2014 Holcim Award, an Academy Award for Architecture from the American Academy of Arts and Letters, the Architectural League’s 2008 Emerging Voices Award, a National Endowment for the Arts Our Town grant and the P/A Award from Architect magazine.

Michael Meredith. Co-founder of MOS Architects in New York City. Meredith received a Master of Architecture with distinction from the Harvard Graduate School of Design (2000) and a Bachelor in Architecture from Syracuse University (1994). With partner Hilary Sample, they founded MOS Architects in 2003. Meredith teaches at Princeton University , and their academic research occurs in parallel to his job as an architect.

Hilary Sample. Co-founder of MOS Architects in New York City. She received a B.Arch. from Syracuse University (1994) and an M.Arch. from Princeton University. She is currently an Associate Professor, at Yale University. Prior to joining Yale, Hilary Sample taught at SUNY Buffalo, where she was awarded the Reyner Banham Teaching Fellowship, and the University of Toronto. In 2010 Hilary Sample received the Academy Award in Architecture from the American Academy of Arts and Letters. She was a visiting scholar at the CCA in Montreal. Her research focuses on the intersection of architecture, health, environments, technology, and design.