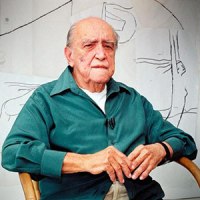 Oscar Niemeyer was born in 1907 in the hillside district of Rio de Janeiro, Brazil and studied at the Academy of Fine Arts there. Niemeyer’s architecture, conceived as lyrical sculpture, expands on the principles and innovations of Le Corbusier to become a kind of free-form sculpture.

In 1938-39 he designed the Brazilian Pavilion for the New York World’s Fair in collaboration with Lucio Costa. His celebrated career began to blossom with his involvement with the Ministry of Education and Health (1945) in Rio de Janeiro. Niemeyer’s mentor, Lucio Costa, architect, urban planner, and renowned pioneer of Modern architecture in Brazil, led a group of young architects who collaborated with Le Corbusier to design the building which became a landmark of modern Brazilian architecture. It was while Niemeyer was working on this project that he met the mayor of Brazil's wealthiest state, Juscelino Kubitschek, who would later become President of Brazil. As President, he appointed Niemeyer in 1956 to be the chief architect of Brasilia, the new capital of Brazil, his designs complementing Lucio Costa’s overall plans. The designs for many buildings in Brasilia would occupy much of his time for many years.

"As an architect," he states, "my concern in Brasilia was to find a structural solution that would characterize the city's architecture. So I did my very best in the structures, trying to make them different with their columns narrow, so narrow that the palaces would seem to barely touch the ground. And I set them apart from the facades, creating an empty space through which, as I bent over my work table, I could see myself walking, imagining their forms and the different resulting points of view they would provoke.

Internationally, he collaborated with Le Corbusier again on the design for the United Nations Headquarters (1947-53) in New York, contributing significantly to the siting and final design of the buildings. His own residence (1953) in Rio de Janeiro has become a landmark. In the 1950s, he designed an Aeronautical Research Center near Sao Paulo. In Europe, he undertook an office building for Renault and the Communist Party Headquarters (1965) both in Paris, a cultural centre for Le Havre (1972), and in Italy, the Mondadori Editorial Office (1968) in Milan and the FATA Office Building (1979) in Turin. In Algiers, he designed the Zoological Gardens, the University of Constantine, and the Foreign Office.