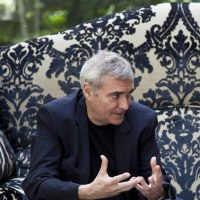 Dominique Perrault (1953), architect from the Ecole Nationale Supérieure des Beaux-Arts in Paris (1978) and Higher Diploma in Towm Planning (1979) from the same university, based its office in 1981 in Paris, and currently has two international offices in Geneva and Madrid. He has been professor in several Architectural Schools, as the one of Rennes, New Orleans, Chicago, Barcelona, Brussels or Zurich and his work has been exhibited in museums all around the world..

Figure of French architecture, Dominique Perrault gained international recognition after having won the competition for the National French library in 1989 at the age of 36. This project marked the starting point of many other public and private commissions abroad, such as The Velodrome and Olympic swimming pool of Berlin (1992), the extension of the European Court of Justice in Luxembourg in (1996), the Olympic tennis centre in Madrid (2002), the campus of Ewha’s University in Seoul (2004) and the Fukoku Tower in Osaka, Japan (2010).

He is member of the Grand Paris scientific council, was appointed curator of the French Pavilion in the 12th Architecture Biennale in Venice (2010), being the subject of the installation METROPOLIS ?.

Among the prizes he has been awarded with, the AFEX Award for the Ewha Womans University in Korea and the “Grande Médaille d’or d’Architecture” from the Académie d’Architecture in 2010, the Mies van der Rohe prize (1997), the French national Grand Prize for Architecture (1993) and the Equerre d’argent prize for the Hotel Industriel Berlier (1989).

The body of his work was assembled in a monographic exhibition: “Dominique Perrault Architecture” exhibited at the Centre Georges Pompidou in 2008 and later made and itinerant show that travelled to Madrid (ICO Foundation, 2009) and Tokyo (Tokyo Opera City Art Gallery, 2010). In 2015 he was awarded with the Praemium Imperiale prize, by the imperial family of Japan and Japan Art Association.