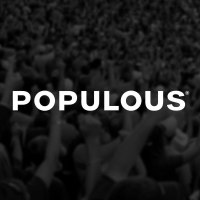 Populous, formerly known as HOK Sport Venue Event or simply HOK Sport, is an architectural firm that specializes in projects for sports facilities and convention centers, in addition to dedicating itself to the organization of significant events. Its founders were, George Hellmuth, George Kassabaum and Gyo Obata.

Among his most important projects are outstanding facilities such as the new Yankee Stadium in New York; the Emirates Stadium, the new Wembley Stadium and the O2 Arena in London; the Estádio da Luz in Lisbon; the BBVA Stadium in Monterrey; Audi Field in Washington D.C. and Stadium Australia in Sydney. They were also in charge of the renovation of the Soccer City Stadium in Johannesburg for the 2010 Soccer World Cup.

Populous previously operated under the name HOK Sport Venue Event, as a subsidiary of the HOK Group, the largest architecture-engineering firm in the United States. In January 2009, Populous was created after the total purchase of HOK Sport Venue Events by the firm's management, completely separating itself from the HOK Group, and today it is one of the largest architecture firms in the world.