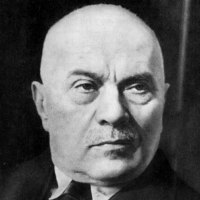 Alexey Viktorovich Shchusev (October 8th 1873 - May 24th 1949) was a Russian and Soviet architect born in Chişinău (Kishinev), whose architectural style bridged several epochs. His works cover the restoration of medieval buildings, Russian Imperialist and Constructivist designs as well as Neoclassical and Stalinist architecture.

Shchusev embarked upon his most wide-scale project in 1913, when his design for the Kazan Railway Station won a contest for a Moscow terminus of the Trans-Siberian Railway. This Art Nouveau design fused elements of the Kremlin towers and traditional Tatar architecture in one of the most imaginative Revivalist designs ever put to execution. The construction of the railway station, however, was not finished until 1940.

After briefly experimenting with Neoclassicism, Shchusev turned to Constructivism in the 1920s. He taught at Vkhutemas from 1920 through 1924. Upon Lenin's death in 1924, he was asked to design a mausoleum for him. It took him just several days to come up with an original architectural solution blending Constructivist elements with features taken from some ancient mausoleums, i.e., the Step Pyramid and the Tomb of Cyrus. Other notable Constructivist designs of Shchusev were the Ministry of Agriculture or Narkomzem in Moscow (1928–1933) and the Institute of Resorts in Sochi (1927–1931), considered to be a major source for Alvar Aalto's Paimio Sanatorium.

After the mausoleum commission, Shchusev was cherished by the Communist authorities. In 1926, he was nominated director of the Tretyakov Gallery. He was appointed head of the group that designed major bridges and apartment complexes in Moscow. His name was attached to the luxurious designs of the Hotel Moskva just a few steps from the Kremlin (1930–1938) and the NKVD headquarters on Lubyanka Square (1940–1947). Some say that he was the first to come up with the idea of Gothic skyscrapers in Moscow.

In 1946, Shchusev established the Museum of Architecture, which helped to preserve remnants of demolished medieval churches and monasteries and was later renamed Shchusev State Museum of Architecture. His last works of importance were the Komsomolskaya station of the Moscow Metro, whose decoration was stylized after 17th-century Muscovite churches, and the plan for reconstruction of Novgorod after the ancient city had been destroyed by the Nazis (in recognition of that, one of Novgorod's modern streets was named after him). Shchusev died four years after the end of the World War II and was buried at the Novodevichy Cemetery.