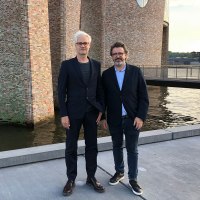 Studio Other Spaces, founded by artist Olafur Eliasson and architect Sebastian Behmann in Berlin in 2014, connects art and architecture through works on interdisciplinary and experimental building projects and artworks for public space.

Seeking to expand the practice of architecture, they aim at finding experiment-based methods for designing space. Their involvement begins by analyzing the situation and results in the reality of the built project. Their work reflects their approach to a holistic architecture practice.

Olafur Eliasson (Copenhagen, 1967) studied at the Royal Academy of the Arts in Copenhagen between 1989 and 1995. He represented Denmark in the 2003 Venice Biennale and has exhibited his work at numerous international museums. His work is part of private and public collections such as the Solomon R. Guggenheim Museum in New York, The Museum of Contemporary Art (MOCA) in Los Angeles and Tate Modern in London, where his seminal work The weather project was exhibited. Eliasson lives and works in Berlin and Copenhagen.

As a professor at the Universität der Künste Berlin, Eliasson founded the Institut für Raumexperimente (Institute of Space Experiments) in 2009, an innovative model of arts education. In 2012, he launched Little Sun, a solar-powered lamp developed together with the engineer Frederik Ottesen to improve the lives of the approximately 1.6 billion people worldwide without access to electricity. Harpa Reykjavik Concert Hall and Conference Centre, for which he created the façade in collaboration with Henning Larsen Architects, was awarded the Mies van der Rohe Award 2013.

Sebastian Behmann. Architect Sebastian Behmann, born in Germany in 1969, has worked with Olafur Eliasson since 2001 and is head of the department of design at Studio Olafur Eliasson, as well as co-founder of Studio Other Spaces. Major projects with Eliasson include the Serpentine Gallery Pavilion 2007 in London, Cirkelbroen (The circle bridge) in Copenhagen (2015), and Fjordenhus in Vejle, Denmark (2009–18), in addition to numerous installations, pavilions, and international exhibitions.