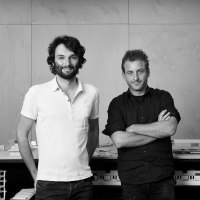 Olivier Camus and Lydéric Veauvy. Graduates with distinction from the Superior Institute of Architecture (ISA) St Luc in Tournai, Belgium (1998 and 1999). After seven years of professional affinities, they created TANK Architectes in 2005. They are winners of the European 40 under 40 2011, awarded by The European Centre for Architecture Art Design and Urban Studies and The Chicago Athenaeum: Museum of Architecture and Design. TANK was also awarded the 3rd Trophy of Nouveaux Albums des Jeunes Architectes (NAJA) in 2006. They have several publications to his back, and have been invited to several conferences and exhibitions in places like the National School of Architecture of Grenoble (ENSAG).