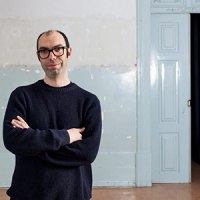 André Tavares (Porto, 1976) is an architect, researcher at the School of Architecture at the University of Minho, and programmer of architecture at Garagem Sul in the Centro Cultural de Belém. He has been running Dafne Editora since 2006, exploring publishing as a form of cultural and architectural practice. and was director of the journal Arquitectos between 2013 and 2015 and general curator, with Diogo Seixas Lopes, of the Lisbon Architecture Triennale 2016, The Form of Form. He is the author of several books, including The Anatomy of the Architectural Book (Lars Müller/Canadian Centre for Architecture, 2016).

He holds a doctorate from the Faculty of Architecture of the University of Porto, where in 2009 he completed his dissertation on the presence of reinforced concrete in architects’ design strategies in the early 20th century.