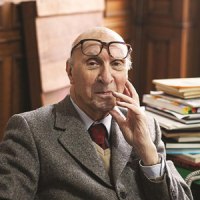 Clorindo Manuel José Testa was an Argentine architect who has achieved greater recognition in the second half of the 20th century.

He was born in Benevento, Italy in 1923. Together with his family he came to Buenos Aires, Argentina when he was months old. In his childhood he liked to build ships and for that reason he thought that naval engineering would be his destiny. In this way, he studies electromechanical engineering for a brief period, with the intention of accessing the Naval Engineering school at the University of La Plata. Then, almost by chance, he entered the School of Architecture of the University of Buenos Aires, graduated as part of the first class of the new Faculty of Architecture and Urbanism in 1948 and began in the final era of Argentine rationalism. Influenced by Le Corbusier, he worked as a draftsman with the Austral team formed by Ferrari Hardoy, Vivanco and Antonio Bonet, who developed the Regulatory Plan for the City of Buenos Aires.

In 1949 he obtained a scholarship from the University of Buenos Aires to make a study trip to Europe. He returns after 3 years, and wins the national competition for the construction of the Argentine Chamber of Construction. After obtaining his title, Testa begins his professional activity by associating in a studio with Francisco Rossi, David Gaido and Boris Dabinovic. This team will work in association until 1958, marking the first stage of the Clorindo work.

Among his most important works in the history of Argentine architecture are the former Bank of London and the National Library. He was also a permanent career plastic artist, with prizes and participation in biennials and museums.