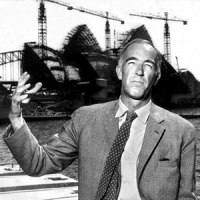 Jørn Utzon was a Danish architect, best known for making the project of the Sydney Opera House, and as the winner of the Pritzker Prize in 2003.

He was born in Copenhagen as the son of a naval engineer. He studied at the Royal Academy of Fine Arts in Denmark. He spent the years of World War II studying with Erik Gunnar Asplund. Then he traveled extensively throughout Europe, the United States and Mexico. On his return he established himself as an architect in Copenhagen.

As a result of the interests of his family in the Arts, from 1937 he attended the Royal Academy of Fine Arts in Denmark where he studied under Kay Fisker and Steen Rasmussen Eller. After graduation in 1942, he joined the studio of Erik Gunnar Asplund in Stockholm where he worked with Arne Jacobsen and Poul Henningsen. It was then that he was particularly interested in the work of American architect Frank Lloyd Wright. After the end of World War II and the German occupation of Denmark, he returned to Copenhagen

In 1946, he visited Alvar Aalto in Helsinki. Between 1947-1948 he traveled Europe in 1948 went to Morocco where he admired the high adobe buildings. In 1949, he traveled to the United States and Mexico, where the pyramids inspired him. Fascinated by the way in which the Maya built skyward to be closer to their God. He said the time he spent in Mexico was "one of the best architectural experiences in my life." In the US, he visited the home of Frank Lloyd Wright, Taliesin West, in the Arizona desert and met Charles and Ray Eames.

In 1992 he received the Wolf Prize in Arts. In March 2003, Utzon was awarded honorary doctorates by the University of Sydney in recognition of his building project of the Opera. Utzon was ill and could not travel to Australia for that purpose, so that it represented his son in the investiture ceremony. It may not be present at the celebrations of the 30th anniversary of the building, for which Utzon was redesigning some areas, such as the main lobby. In 2003 he was also given the prestigious Pritzker Architecture Prize.