Migrations of people have existed for millennia and occur at a range of scales and time-periods (from small-scale journeys to work through to intercontinental resettlement). As a geographer I have long been interested in these and thought it was about time I mapped them! Using data from the Global Migrant Origin Database and R, my favourite stats software, I have produced the maps you see here. Each line shows the origins and destinations of at least 4000 people in a given year (2000 in this case). The more red the line the more people it represents. I have used great circle distance to plot them onto the Earth. The map below shows the same magnitude of flows but just for Europe. The Earth has been flattened for this one so the flows are represented by arbitrary arcs. 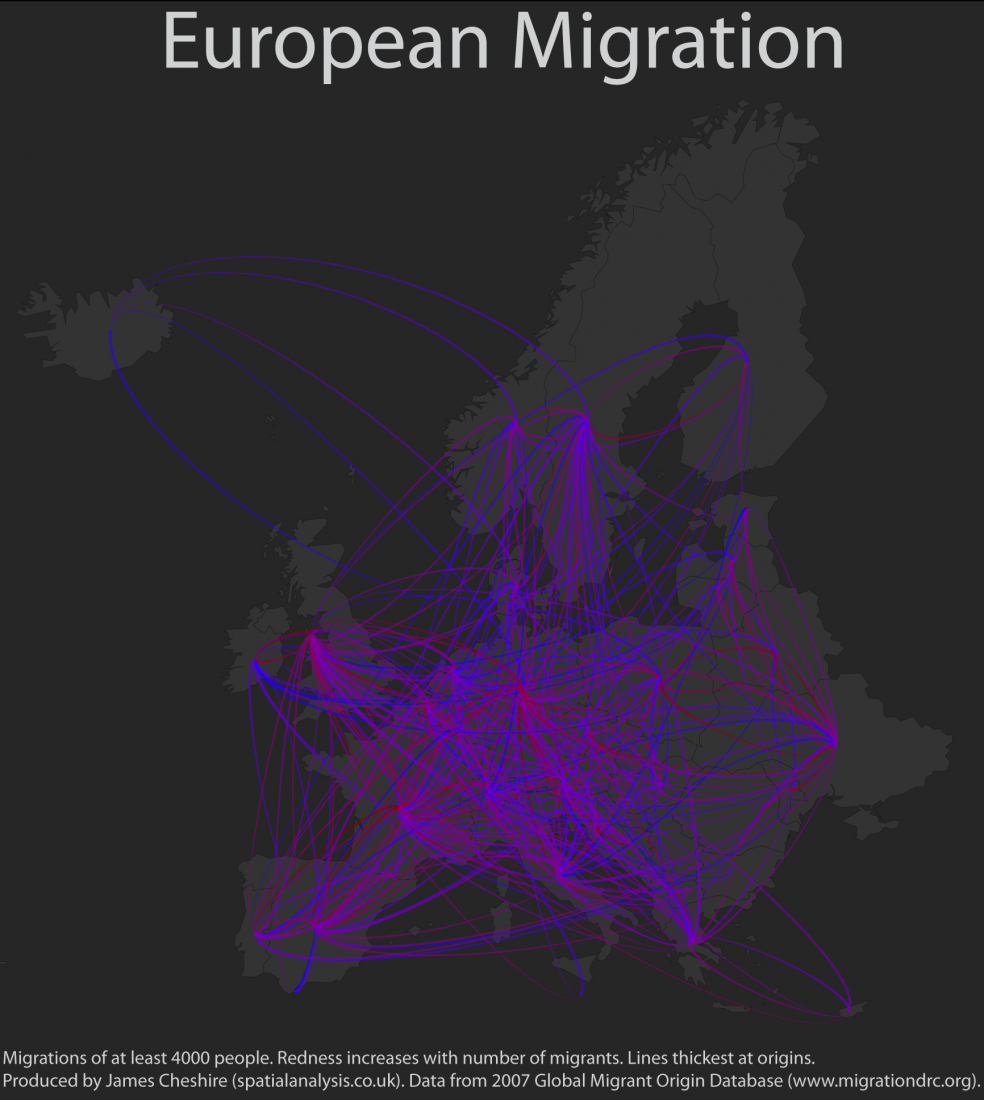 These visualisations aren’t perfect. Firstly they are based on a dataset where many of the movements are best guesses rather than measured data. You can read more about this here. It would also be great to have actual flows rather than inferred flows based on the number of migrants in each country. If I made these maps again I might draw lines between capital cities or population centres to avoid the impression that the majority of migrations to/ from Russia start/end in Siberia for example. There are of course endless ways of partitioning the data/ selecting the colours. Despite this I am really pleased with effect and the maps go some way to showing the dynamism in many 21st Century populations.

I think Paul Butler’s Facebook Map threw down the gauntlet to the R community in terms of the quality of visualisations that can be produced with the software so I was keen to see what I could do. To produce the maps I calculated the great circle distances using the geosphere package, I calculated my own arcs for the second map and used the maps package for my World outline. The visualisations (including projections) were done using ggplot2. Over the next few months I plan to stick together a more complete tutorial (PhD write-up permitting!). 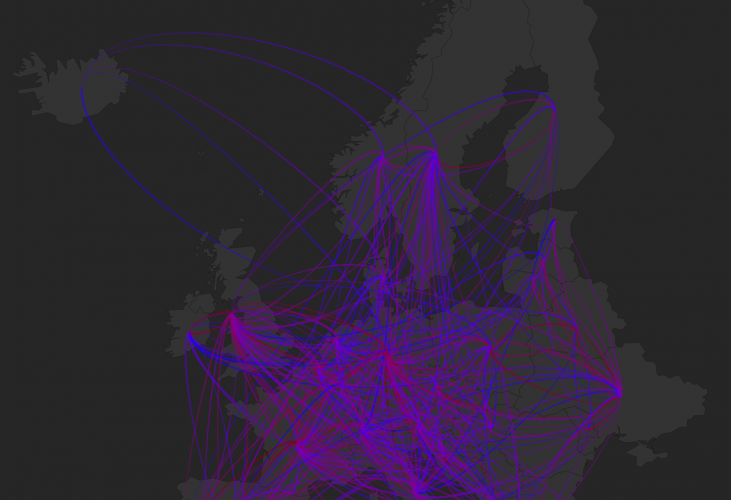 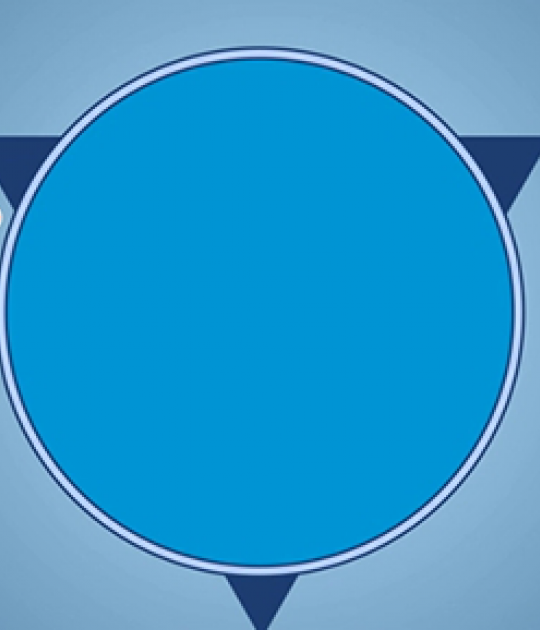 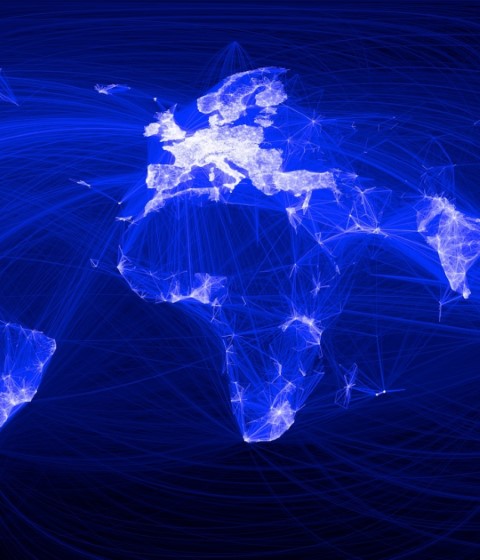 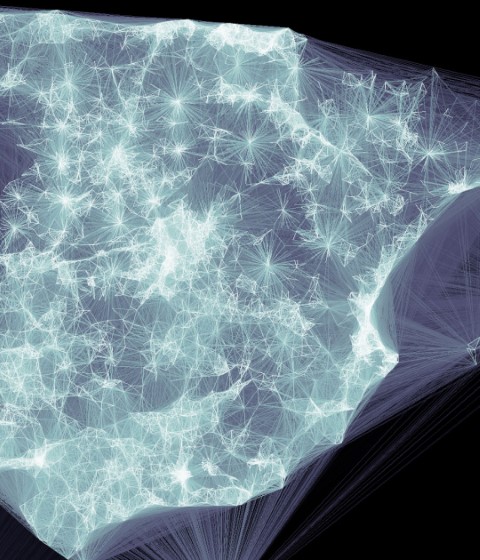 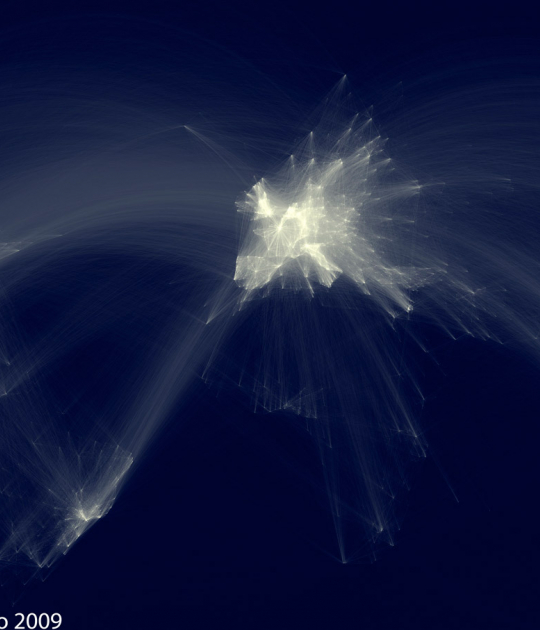 Map of Scientific Collaborations between researchers