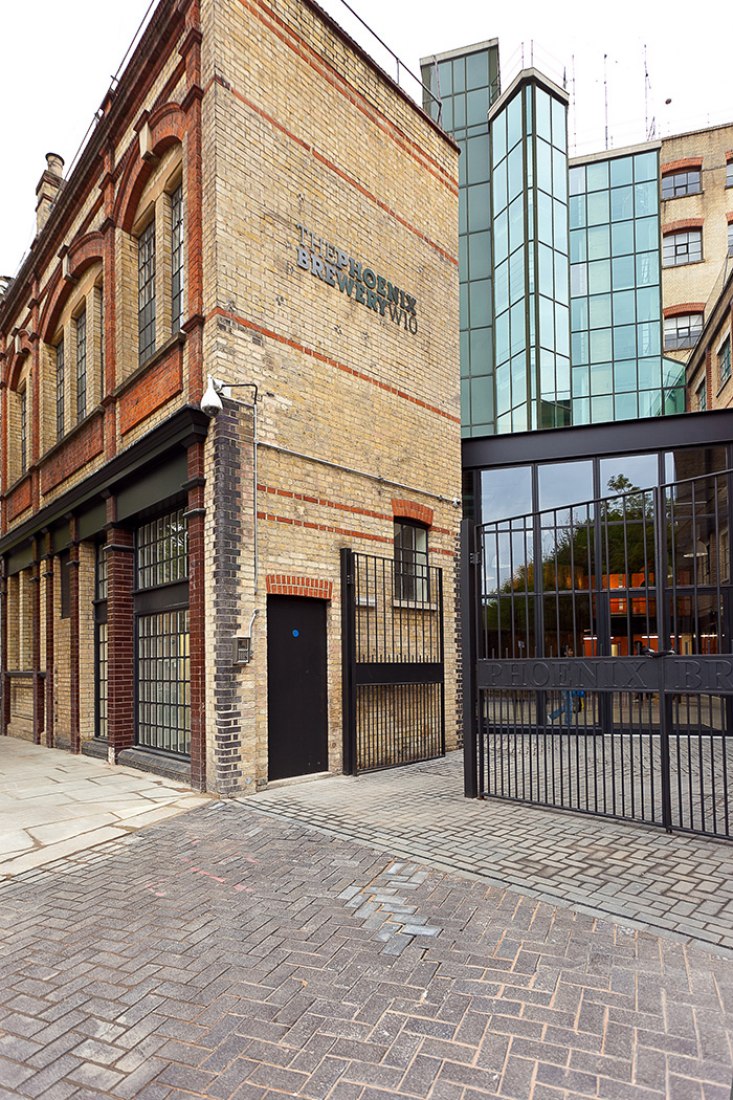 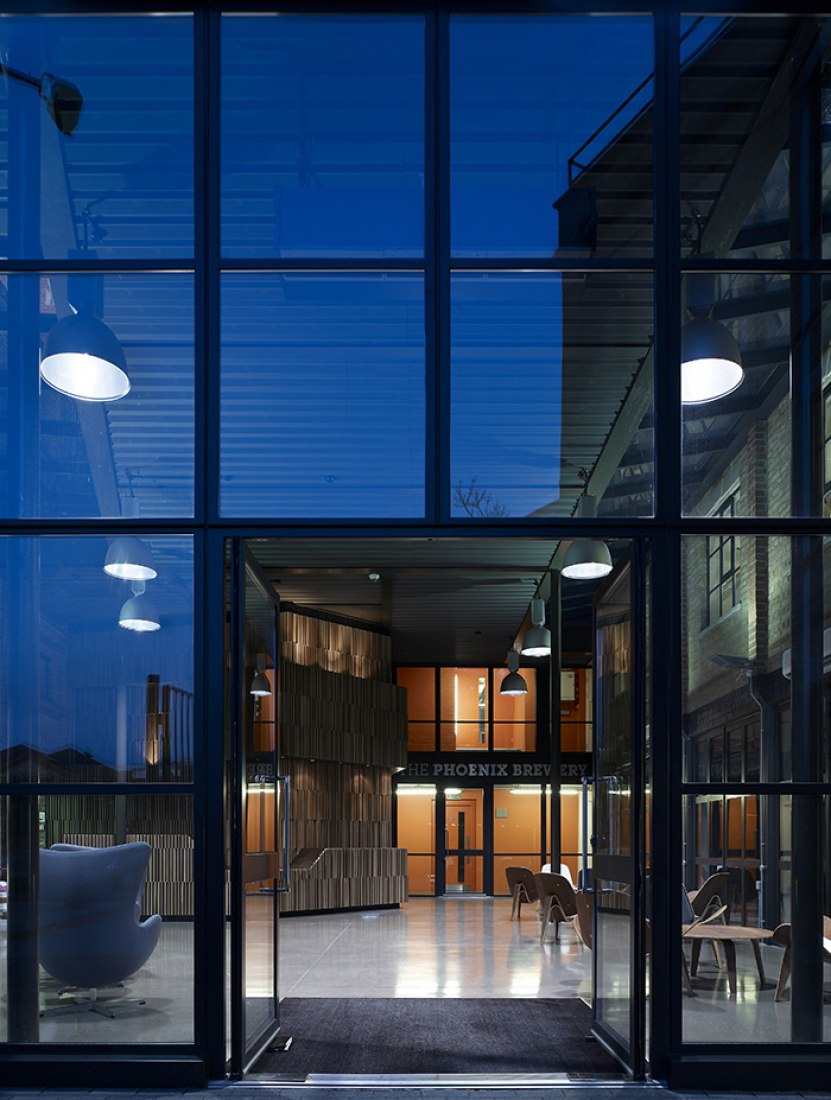 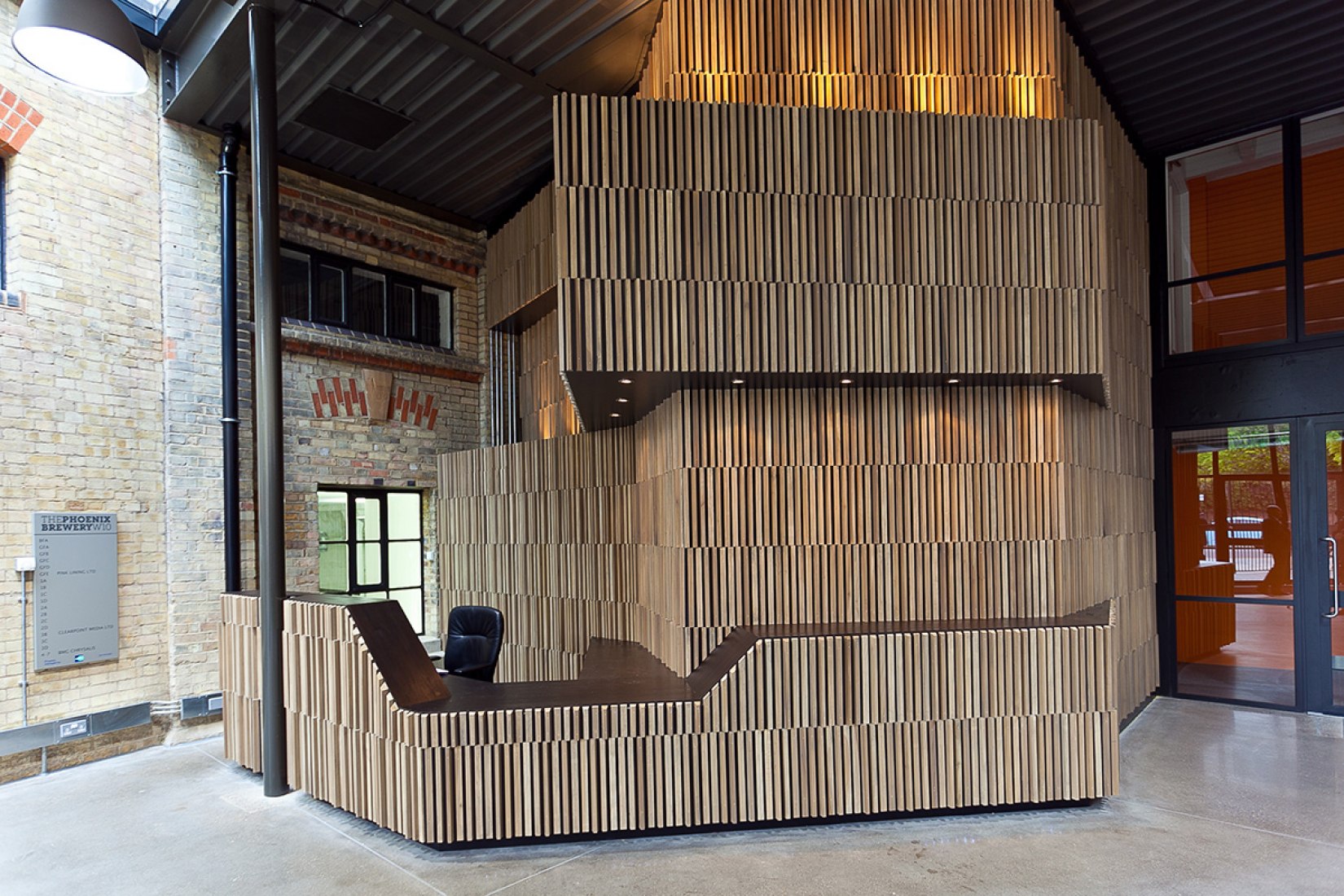 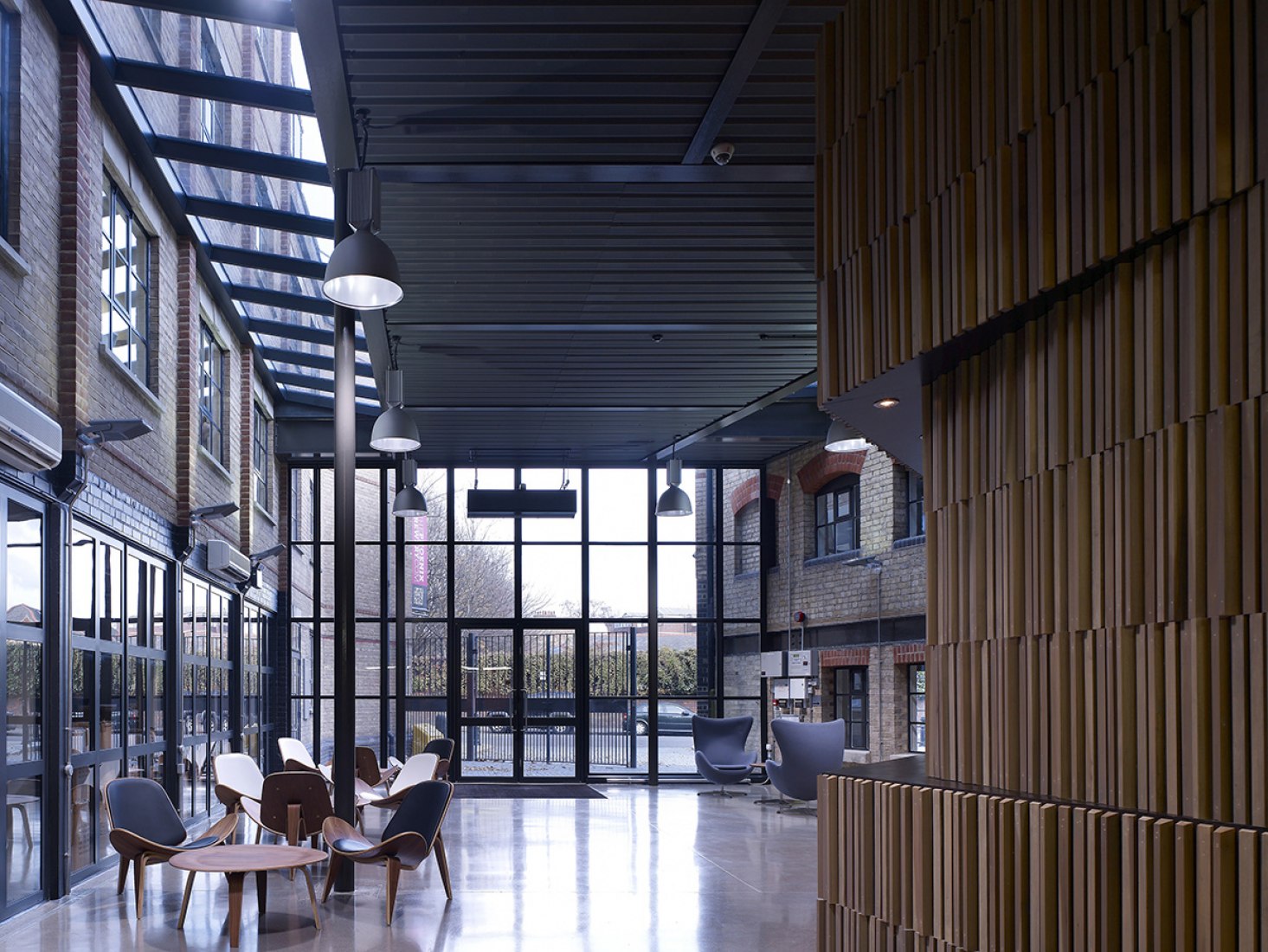 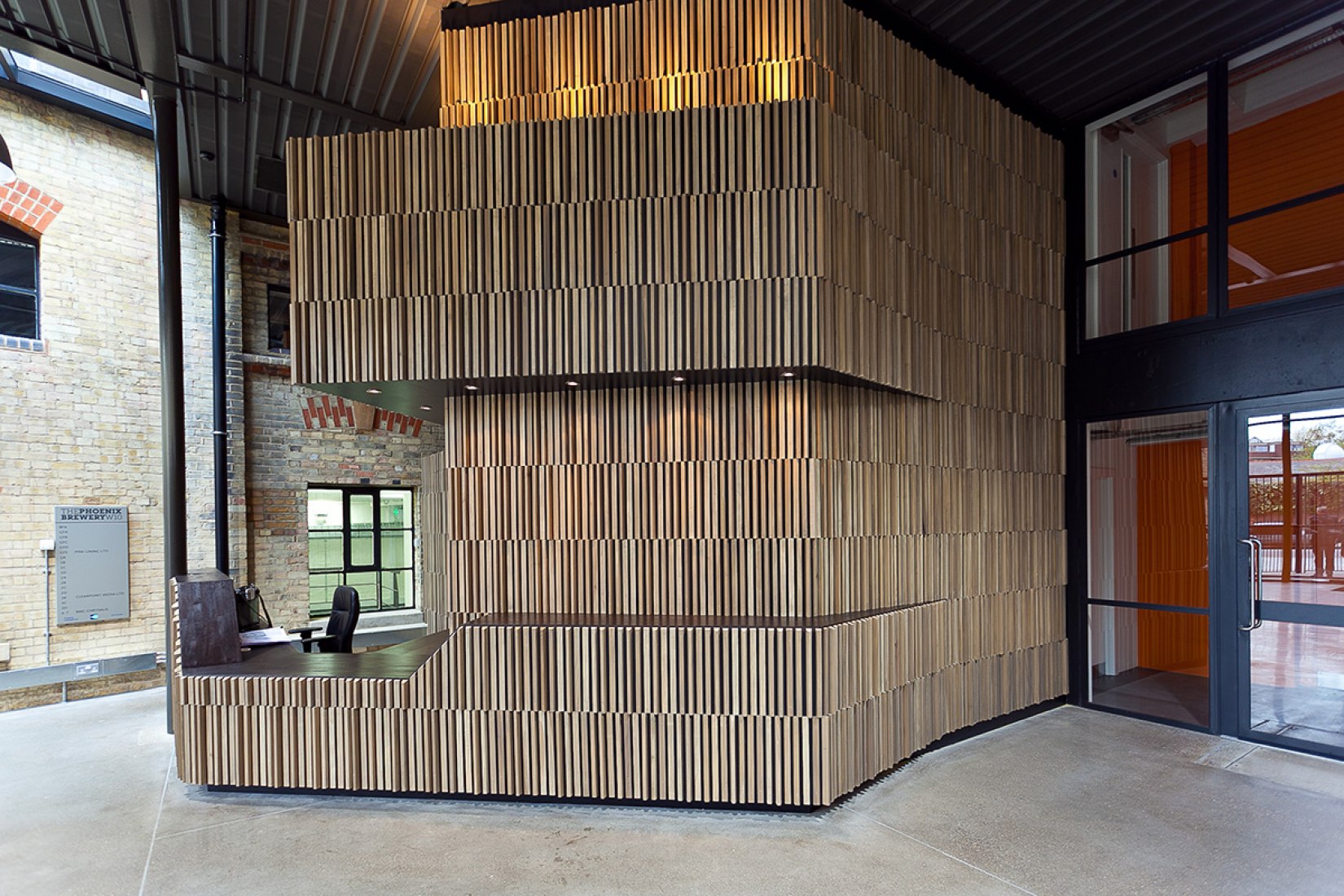 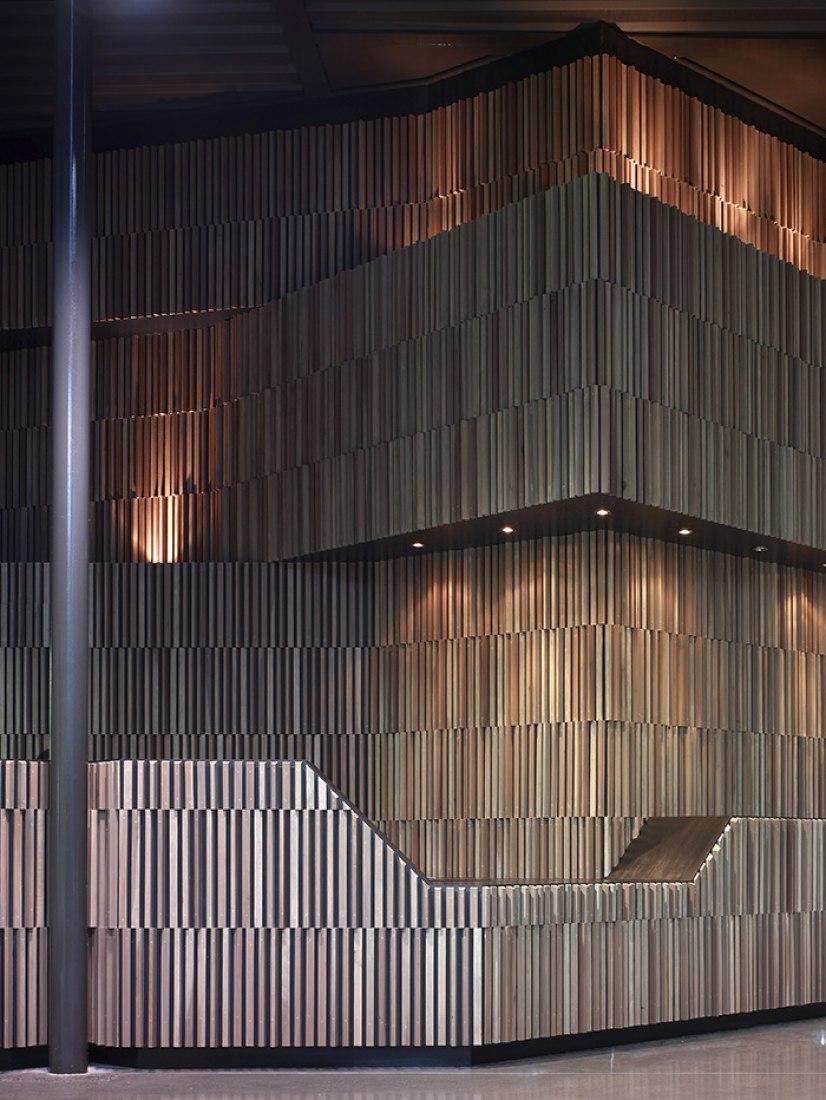 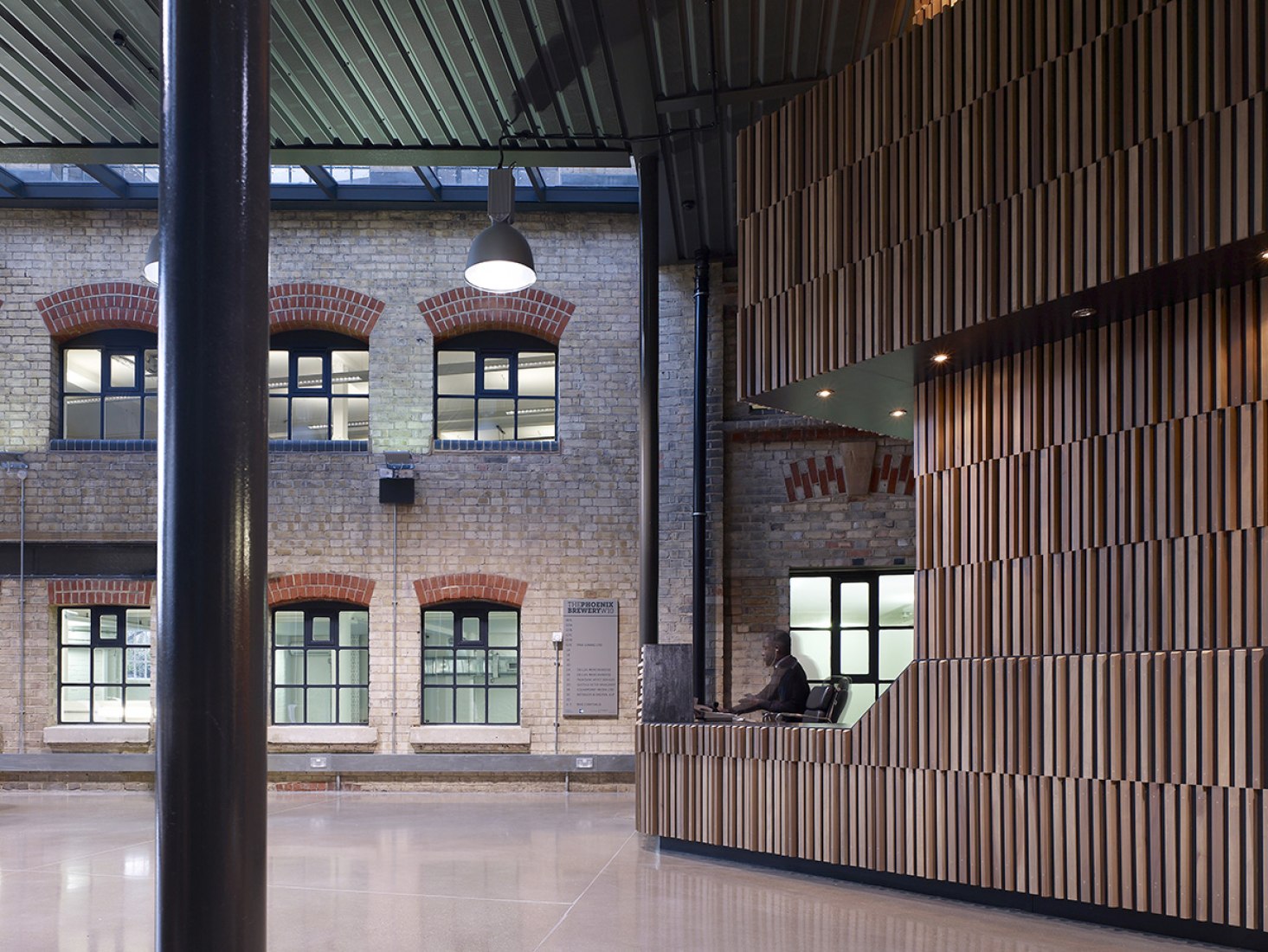 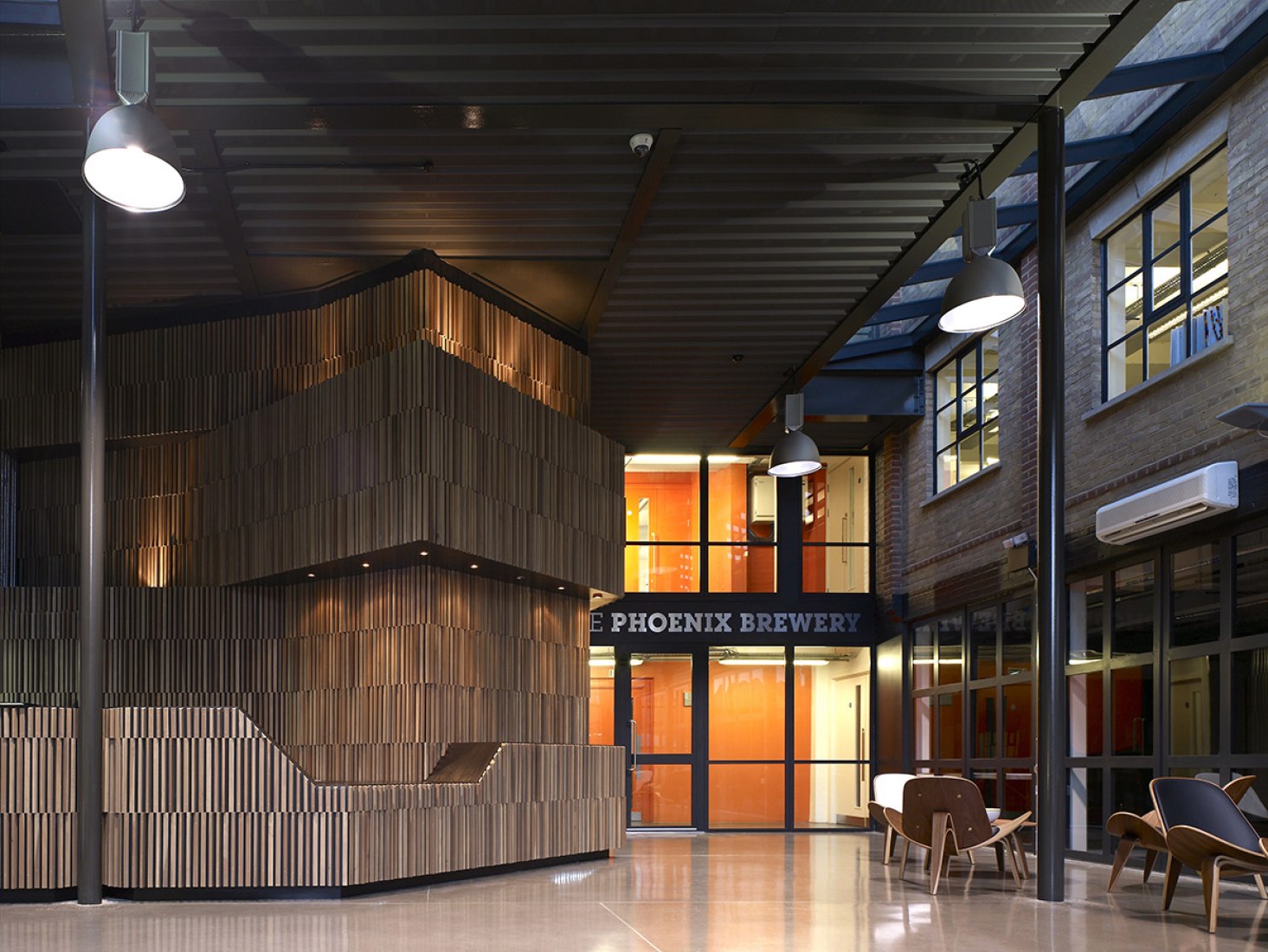 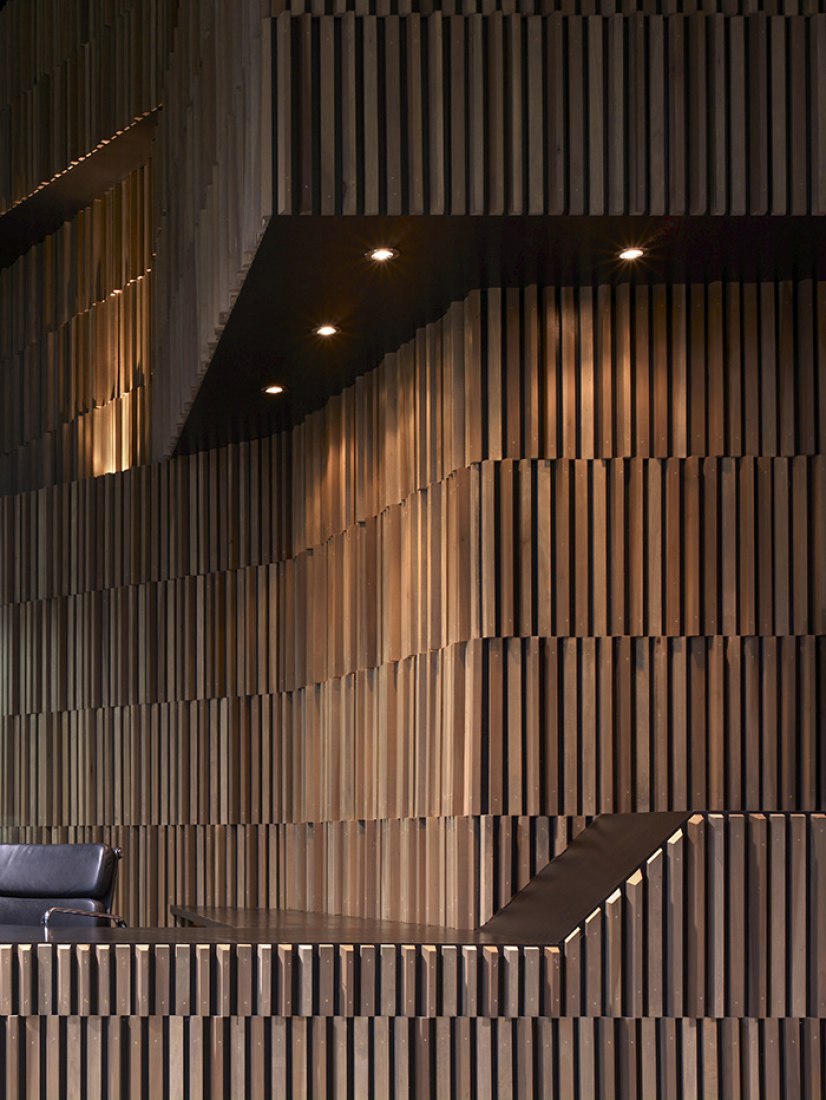 Memory of the project.

A sculptural timber form is the most striking thing that you see when you enter the reception of a converted warehouse building in North Kensington, west London. Made from panels of stained tulipwood, this feature is not only decorative but also functional. Architect Stiff + Trevillion designed it to disguise an ugly staircase which the budget did not allow the designer to replace. And, in a space dominated by hard surfaces, it also serves an important acoustic purpose. The structure also houses the offices’ reception desk, providing the reception team with a presence that many would envy.

The architect was not responsible for turning the building into offices. That had already been done, and those offices housed the headquarters of Chrysalis Records, which had been at the forefront of the 1980s New Romantics movement in the UK, publishing bands including Spandau Ballet and Ultravox. Since then it had changed hands several times.

The client wanted to make the most of the building. It decanted Chrysalis to the upper floors, and Stiff + Trevillion designed a new reception space by roofing over an existing courtyard. This both gave the building a more imposing entrance, and provided an area that could be used for informal meetings. The architect went for a simple industrial aesthetic, with a glazed entrance. It has exposed the underside of the new metal deck roof, installing glazing around the perimeter at the junction with the existing buildings, to bring in light. The floor is of polished concrete.

“‘At first we just specified that we wanted a hardwood,’ Trevillion explained, but when he investigated further he found that tulipwood was ideal for his purposes. Although he was aware of the material, he had never used it before but he would, he said, use it again. He liked the fact that it was light coloured, with few markings and that it took a stain well – at the Phoenix Brewery it has been coloured a rich mid brown, with a finish that also gives it Class 0 fire rating. And one of the over-riding factors, Trevillion said, was that ‘it takes a good edge. You can get a sharp arris on it’. This was vital since those edges play such an important role in the success of the sculptural conceit.

The angling of the battens provides a range of surfaces on which sounds can be absorbed or bounced around, softening what would otherwise be a very reverberant acoustic in the space. The way these are arranged is slightly reminiscent of the interior of some concert halls, but there is an important difference. Acoustic design for performance spaces is a specialist subject, calling for the use of highly skilled consultants, since it is vital that, as near as possible, every member of the audience should hear the music in ideal conditions.

One of the best value and most versatile US hardwood species, tulipwood is widely used in construction, furniture and interior joinery. Although relatively light in weight and soft, American tulipwood has excellent mechanical properties and has a very high strength to weight ratio making it ideal for laminated beams and structures. Tulipwood is often painted or stained, but the use of natural finishes to show off its exciting colour variations and grain patterns, is increasing. 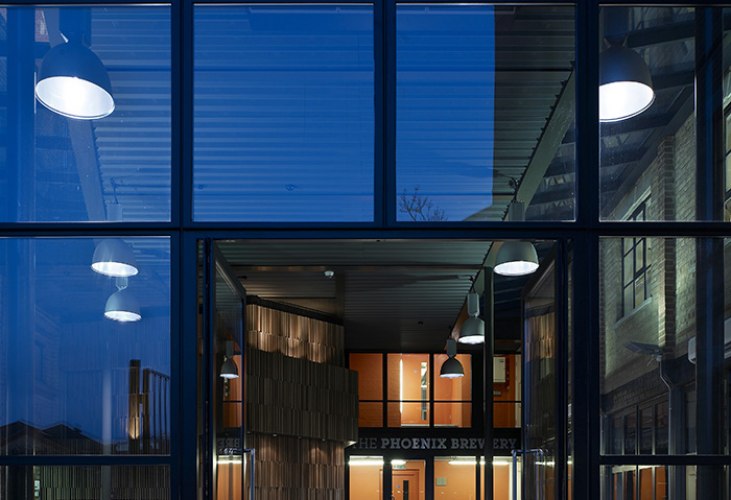 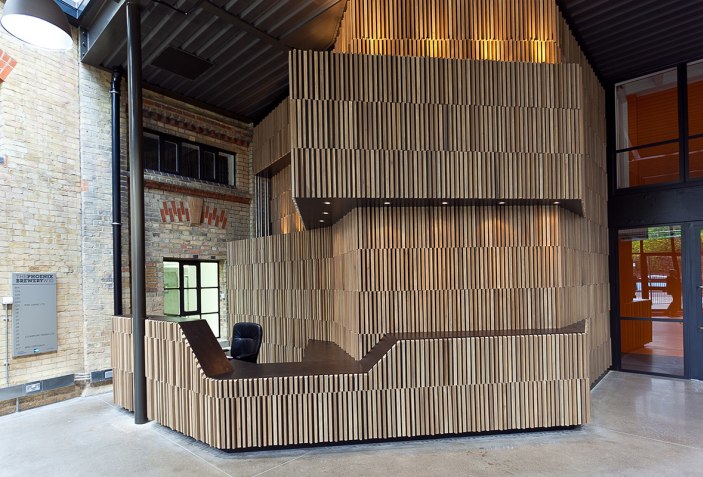 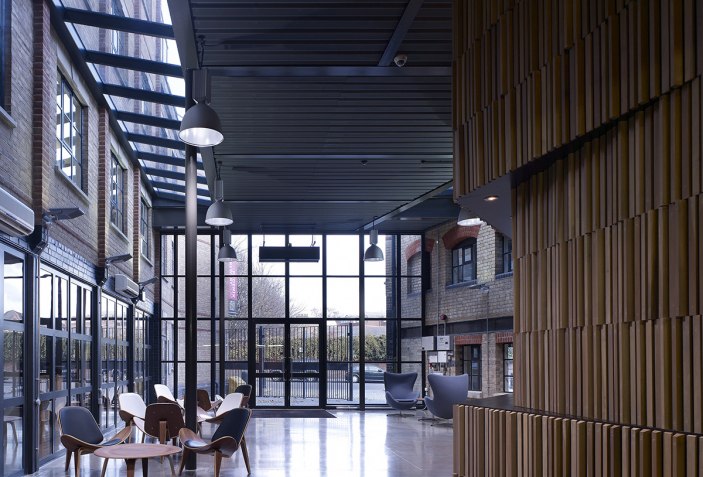 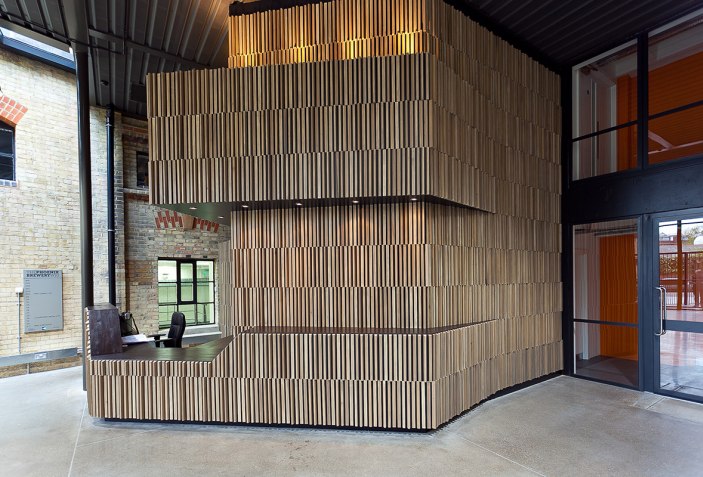 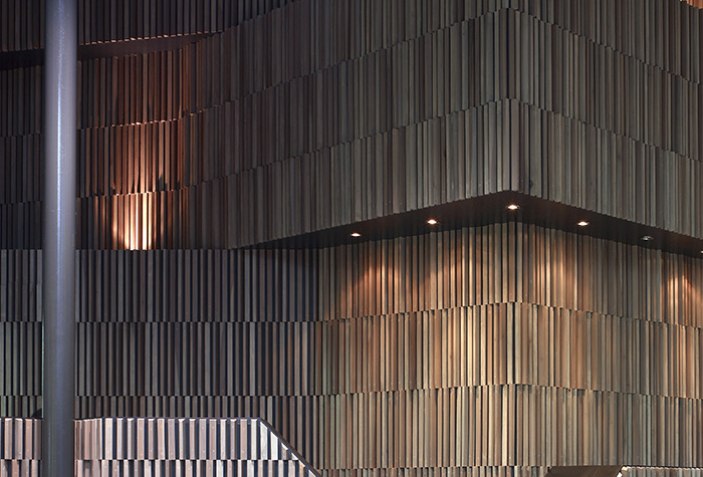 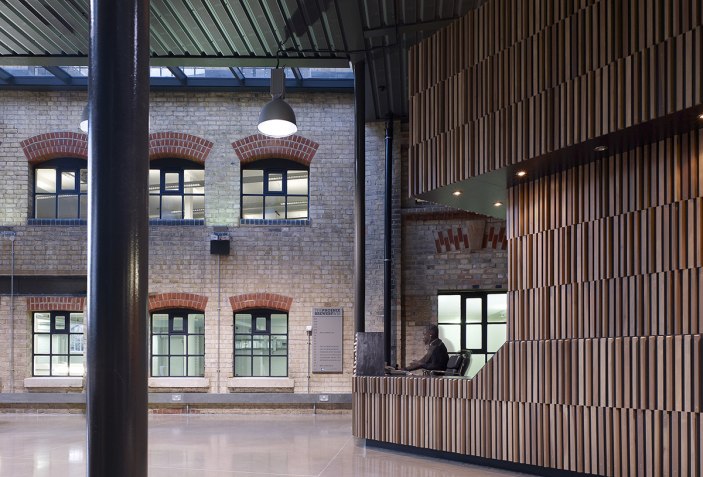 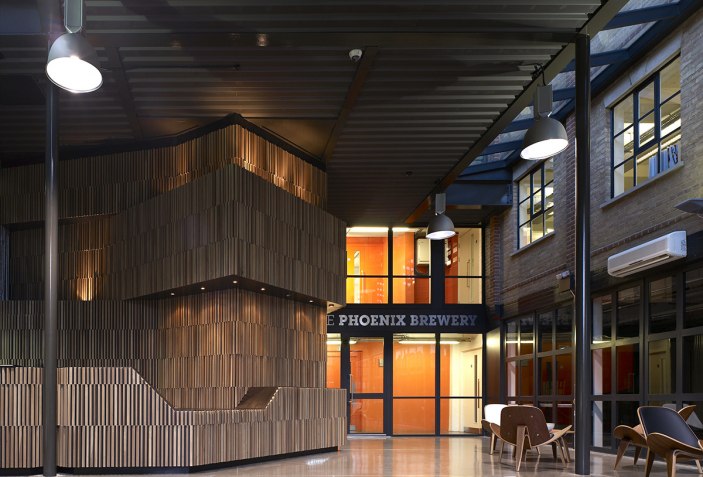 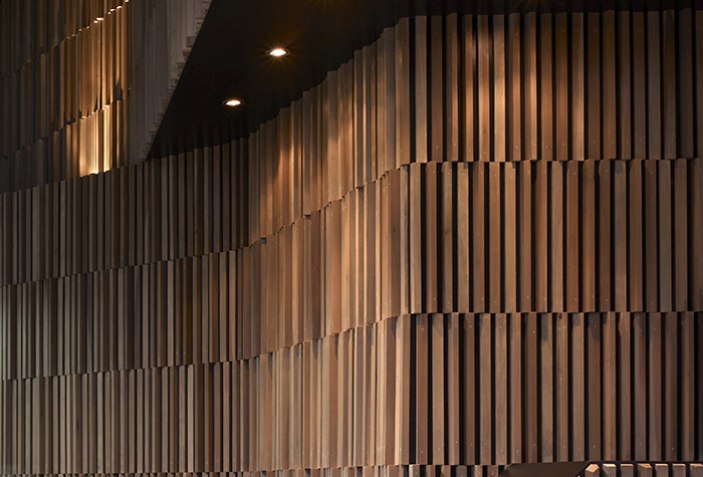 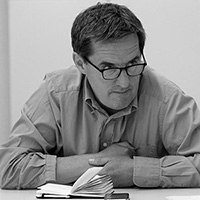 Qualified as an architect in 1981 and formed Stiff + Trevillion after working for Rock Townsend and Chapman Taylor. In the 1990s he ran the Berlin office. Over the years he has taught at Westminster, Brighton and Sheffield Universities, and continues to exhibit drawings and paintings. In addition, Mike has been a member of the Royal Borough of Kensington & Chelsea Architecture Appraisal panel since its inception and he also sits on the Earls Court Review panel. Mike is an External Examiner for the Liverpool John Moores University. 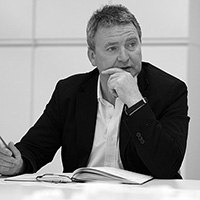 Qualified as an architect in 1981 and after a short period with EPR architects formed Stiff+Trevillion with Mike Stiff. He has been involved in the residential, commercial and education sectors of the business and has also worked in the hotel and student housing sectors.