Tomorrow opens a play of Czech Vaclav Havel "The Unveiling"at the Sala Tarambana. An outstanding play by its current contemporary, 1997. Represented by a young company, "El Si Mágico" and performed by Nüll García, Sofía Novoa, Jose Rubio led by Chema Coloma. Do not miss it! Highly recommended.

"...The play shows the struggle of the character, Vanek, against the standardization that attempts to depersonalize any act of occupation or search for identity. One could think that since so many years have gone by and that it belonged to the specific period at the end of communism in Eastern Europe, Havel’s play has lost interest, but this is not the case: his themes and worries are universal and many of the problems that arise are still current. Similar situations reworked, are repeated today like a type of never-ending cacophony. In other words, consumerism, individual conformism or relativistic cynicism and skepticism are the themes that are the code of the current guidelines for occupying a house and its subsequent inauguration." 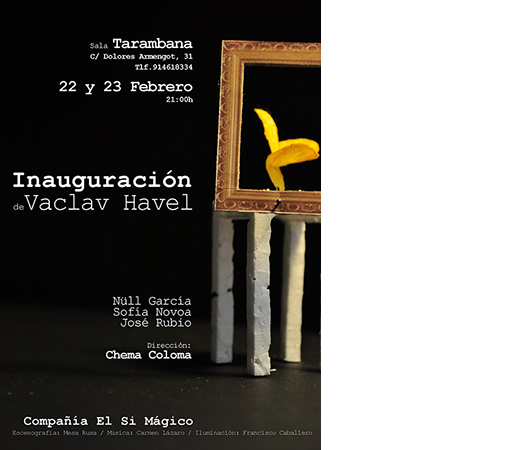