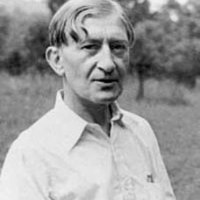 Josef Albers was born in Bottrop (Westphalia, Germany) in 1888 and died in 1976 in New Haven, Connecticut, in the United States, his adopted country to where he emigrated in 1933, the year of the rise to power of the Nazi party, which impeded the continuation of the Bauhaus where Albers had been a teacher at its venues in Weimar, Dessau and Berlin. Having moved to America, Albers taught at Black Mountain College (North Carolina) until 1949. He was later head of the Department of Design at Yale University (New Haven, Connecticut), retiring from that position in 1958. From his early years at the Bauhaus in his native Germany until the end of his career at Yale, Albers combined artistic creation with teaching and many leading American artists trained with him.