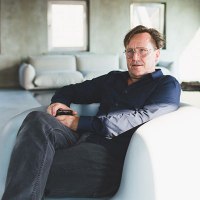 Brandlhuber+ is an architecture office dedicated to the idea of collaboration with other practices, disciplines, and individuals. It was founded by Arno Brandlhuber in 2006. Arno Brandlhuber works as an Architect and Urban Planner. He studied Architecture and Urbansim at the TU Darmstadt and the Accademia del Arte in Florence.

From 1992 on he initiated several project- and office partnerships. During this period numerous projects and publications were realized, including the projects Neanderthal Museum (Mettmann, 1996), Kölner Brett (Cologne, 2000), and Crystal (Copenhagen, 2006). In 2006, he founded Brandlhuber+ as an architecture office dedicated to the idea of collaboration with other practices, discplines, and individuals.

Expanding on the idea of collaboration, he started the ongoing practice of Brandlhuber+ Emde, Burlon with built projects such as Brunnenstrasse 9 (Berlin, 2009), the Antivilla (Krampnitz, 2014), and St. Agnes (Berlin, 2015); currently working on LoBe, a mixed use housing project in Berlin, and a private art collection. Furthermore he is collaborating with Muck Petzet, working on the Tacheles project; Christian Kerez & Muck Petzet working on the Spreestudios; Michalski&Wagner on projects in Sicily and Sam Chermayeff on projects in Berlin.

Besides his building practice he is researching the transition of spatial organization and production in German history, focusing specifically on the Berlin Republic. As part of this research he put on several exhibitions and publications including „Von der Stadt der Teile zur Stadt der Teilhabe“, „The Dialogic City: Berlin wird Berlin“ and others.

In recent years Arno Brandlhuber’s practice has been dedicated to the idea of legislation in architecture as a main factor for the built environment. This mindset resulted in ongoing investigations, both built and theoretical, such as the ARCH+ issue titled Legislating Architecture and the 2016 film Legislating Architecture, made in collaboration with director and film maker Christopher Roth.
Together they formulated the second chapter The Property Drama which premiered at he 2017 Chicago Architecture Biennial. The film provoked a vivid political discussion resulting in an ARCH+ issue on the topic of property and land tenure, as well as an travelling-exhibition starting in November 2018 at the V-A-I.