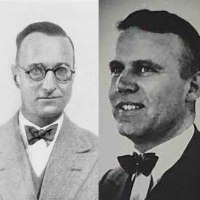 The Brinkman and Van der Vlugt architectural office, one of the most important and successful in the Netherlands between the wars, was the primary exponent of Nieuwe Bouwen. Johannes Brinkman handled the technical aspects and left the design largely to Leendert van der Vlugt. In the early days, the firm’s main client was the coffee, tea and tobacco company Van Nelle. Brinkman and Van der Vlugt designed its iconic factory building in Rotterdam as well as sites in Leiden and Utrecht. They also designed homes for the company’s directors, including the Van der Leeuw and Sonneveld houses.

Son of architect Michiel Brinkman, he began working in his office while studying at the Technical University of Delft. After his death in 1925 he continued his study, incorporating Leendert Cornelis van der Vlugt. With him he formed an active studio between 1925 and 1936 - the date of Van der Vlugt's death -, which on occasions also collaborated with Willem van Tijen. Subsequently, Brinkman partnered with Johannes Hendrik van der Broek.

Brinkman and Van der Vlugt's main work was the Van Nelle tobacco, tea and coffee factory in Rotterdam (1926-1929), to which were added the headquarters of the Theosophical Union in Amsterdam (1925-1926) and the headquarters of Van Nelle in Leiden (1925-1927), as well as several residential buildings: the Van der Leeuw villa (1927-1928), the Sonneveld house (1932-1933) and the Boevé house (1934), all in Rotterdam. Another emblematic work of his was the Feyenoord stadium in Rotterdam-South (1935-1936). They also designed a telephone booth (1931) which over time has become an iconic element of the Dutch urban landscape.

With Van Tijen they built the Bergpolder building in Rotterdam in 1934, a ten-story housing complex with a steel structure and wooden walls and floors.

Van der Vlugt was a Dutch architect who studied between 1910 and 1915 at the Academy of Fine Arts and Technical Sciences in Rotterdam. After several years of work in different architectural firms, in 1919 he settled on his own account.

He designed houses in Beukelsdijk, Rotterdam, the Netherlands (1921), the Higher Technical School and the Industrial School (1922), both in Groningen.

From 1925 he worked with Johannes Andreas Brinkman (1902-1949), son of the architect Michiel Brinkman, who had studied at the Higher Technical School in Delft. In the shared office Brinkman was in charge of organizational and technical matters and Van der Vlugt of architectural matters.

In the first stage of their collaboration they built the Theosophical Temple in Amsterdam (1927) and the Van der Leeuw House in Rotterdam (1928-1929). A wide window strip crosses the smooth front of the building and the garden facade, with a two-storey greenhouse, is fully glazed.

Later they built several houses, such as the De Bruyn house in Schiedam (1930-1931) and the Sonneveld house in Rotterdam (1929-1933). Despite its dimensions, the Van Nelle tobacco factory in Rotterdam (1926-1930), also built under the International Style sign, is light and not heavy due to its transparent mirror-glass curtain wall facade suspended in front of the metallic structure. A circular glass roof houses a cafeteria. The facade of the office building, accessed by a glass corridor, is arched.

The houses of the Bergpolder discoidal blue-collar skyscraper in Rotterdam (1933-1934, in collaboration with Willem van Tijen) open onto galleries. The stairs and the elevator are located behind the side façade, fully glazed, existing in the entrance part. On the death of Van der Vlugt, Brinkman worked in collaboration with Johannes Hendrik van der Broek.