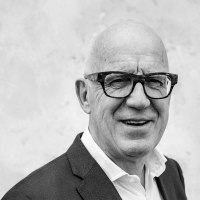 De Zwarte Hond is a design agency for architecture, urban design and strategy with offices in Groningen, Rotterdam and Cologne. Through a combination of social commitment and craftsmanship, they create high-quality projects that are sensitive to their context, the needs of users and the vision of our customers.

Jurjen van der Meer (1953) is founder of De Zwarte Hond. After studying architecture, he worked for a number of years in Berlin, after which he founded Karelse Van der Meer architects together with Thon Karelse. In 1992 the Groningen office expanded with an office in Rotterdam, followed by Cologne, Germany in 2011. Since 2004, the agency is named De Zwarte Hond.

De Zwarte Hond has an overview of the various forces that play a role in a given place. They can calculate what will add value and improve the quality of life – for residents, the street, the neighbourhood and the city. Their designs are firmly grounded and speak the language of their environment, yet they display a subtle and unexpected individuality. This is the result of their details, their materials, their strong connection between inside and outside, and their smart and flexible use of space.

They design places, buildings and whole environments that look out of the ordinary. Conceived, rather than created; built to last and flexible enough to move on to a new phase of life in the future. Yet their places always touch the heart. Designing and realising interwoven spaces, that’s the essence of their office: they unite architecture and urban design.