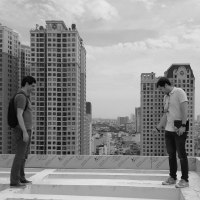 The OOOA studio, formed by Tomás Osborne (El Puerto de Santa María, 1980) and José Carlos Oliva (Plasencia, 1979), both architects by the School of Architecture of Seville, was established in 2014, mainly dedicated to the drafting of projects for public administrations through tenders. During the last years, they have carried out several projects in Vietnam, whose works have been recognized with publications and mentions in awards. They have been awarded, through public tender, the reform in the Urbanization of the Higher Polytechnic School of the Algeciras Campus, the remodeling of the Authorities Tower of the Jerez Circuit (first prize in ideas competition), the Library of the Algeciras Bay Campus of the University of Cadiz, and recently the extension and reform of the Social Services Building in Sanlucar de Barrameda, as well as two educational centers in the province of Almeria.

His built work has been highlighted with different recognitions, such as the Andalucía de Arquitectura Award for new construction work in 2022 given by the Consejería de Fomento de la Junta de Andalucía, mention to the best new construction work in the 9th Sánchez Esteve Awards 2020-2021 of the Colegio de Arquitectos de Cádiz, Accésit to the international work 2019-2020 in the COAS Awards of the College of Architects of Seville, Torres Clavé Award in its 8th Edition 2018-2019, of the College of Architects of Cadiz, Award to the national work 2017-2018 in the COAS Awards and Sánchez Esteve Award in its 7th Edition 2016-2017.