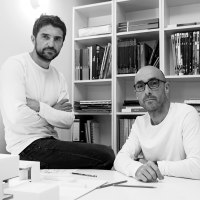 Ripoll Tizón is an architecture studio founded in 2002 by Pep Ripoll and Juan Miguel Tizón.

Pep Ripoll and Juan Miguel Tizón are architects from the Barcelona School of Architecture. Since 2002 they have shared a professional studio, combining the development of public and private promotion projects with participation in national and international architecture competitions.