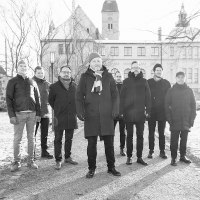 JKMM Architects is a group of architects and designers based in Helsinki, Finland. We started in 1998 with four founding partners – Asmo Jaaksi, Teemu Kurkela, Samuli Miettinen and Juha Mäki-Jyllilä. Today, we are a team of more than 70 people.

The American Architectural Record chosen JKMM as one of the “10 Emerging New Firms in the World”. Our works have been presented in various exhibitions including Venice Biennale, Louisiana Museum of Modern Art and the Museum of Finnish Architecture.

Freja Ståhlberg-Aalto, Project Architect, Amos Rex
Architect SAFA
Freja Ståhlberg-Aalto (born in 1973) graduated in Architecture from Helsinki University of Technology in 2001. At JKMM, she has been involved in the design of award winning buildings such Seinäjoki Public Library, Verkatehdas Arts & Congress Cen- tre and Turku New City Library. Since 2014, she has worked as the project architect of Amos Rex. She is now in the final phase of her doctoral research project focusing on the role of aesthet- ics in the care environment. She has held a part time teaching position at the Department of Architecture, Aalto University.

Päivi Meuronen, Architect specialising in Interiors, Amos Rex
Interior Architect SIO
Päivi Meuronen (1967) graduated in Interior Architecture from the University of Art and Design, Helsinki and has been the driving force behind JKMM Architects’ interior designs since 2003. She leads a team of 18 at JKMM specialising in interiors. The team has been successful in creating projects where JKMM’s architecture and interior design form a seamless unity. JKMM’s interior for the recently restored Alvar Aalto designed library in Otaniemi was awarded the Finlandia Prize for Architecture 2017.

Katja Savolainen, Restoration Architect, Amos Rex
Architect SAFA
Katja Savolainen (born in 1969) graduated in Architecture from Helsinki University of Technology in 1999. She has been special- ising in conservation architecture since 2000. In 2004 she joined JKMM where, as part of the Amos Rex project, she has been responsible for the restoration of the Functionalist Lasipalatsi building in addition to a number of other historically significant projects around Finland. Katja has also been teaching and re- searching traditional building methods and their restoration with a particular interest in wooden structures.